The Untold Truth of Donna Mills’ Net Worth, Daughter and Family Life

With a net worth of $9 million, Donna Mills is a veteran actress whose acting career has spanned over five decades. She has proved her mettle in the movie industry and now has more than seventy acting credits to her name.

Starting her career in the mid-1960s, Donna became very popular in the ’80s and ’90s, thanks to her long-term appearance on the classic soap opera, Knots Landing, for which she has received multiple awards, including Soap Opera Digest Award.

Although she took to the center stage with her role as Abby Cunningham in Knots Landing, Donna worked her way to the summit of her career by beautifully executing her roles with precision.

She has been honored by the members of Pacific Pioneer Broadcasters for making worthwhile contributions that have lasted more than fifty years to the movie industry. She has equally been recognized with other accolades such as Daytime Emmy Awards and Hollywood Reel Independent Film Awards. Discover more about her illustrious career, earnings, and relationships below.

How Donna Mills Achieved Her Net Worth

Donna Mills has made her presence felt in Hollywood through her impeccable acting talent, which she has been putting on display for many decades now. Interestingly, the actress hasn’t slowed down a bit as she keeps on scoring roles in TV series and movies, from which she has earned tremendous fortune.

More so, her illustrious career has been enriched by her role in blockbuster movies such as Play Misty for Me, where she played the main role alongside Clint Eastwood.

The movie was both critically and commercially successful as it grossed $10.6 million at the box office from a production budget of $950,000. Similarly, Donna Mills also racked up impressive earnings from playing the role of Priscilla in the 2015 biographical comedy-drama, Joy, which was equally a box office success. Following its theatrical release in December 2015, the movie grossed a total of $101.1 million from a budget of $60 million.

Other hit TV series the comely actress has starred in include Hawaii Five-O, The Six Million Dollar Man, CHiPs, Police Woman, General Hospital, The F. B. I, Fantasy Island, to mention a few. Although her exact earnings from the classic soap opera, Knots Landing is still under wraps, Donna ought to have made lots of money through her regular roles for nine good years.

For this and more, Donna Mills has garnered a whopping net worth of $9 million, which is bound to rise in the coming years, as she is still very much active in the movie industry. Aside from movies, she has also earned a fortune from her other entrepreneurial ventures, including her makeup line, The Eyes Have It and many others. 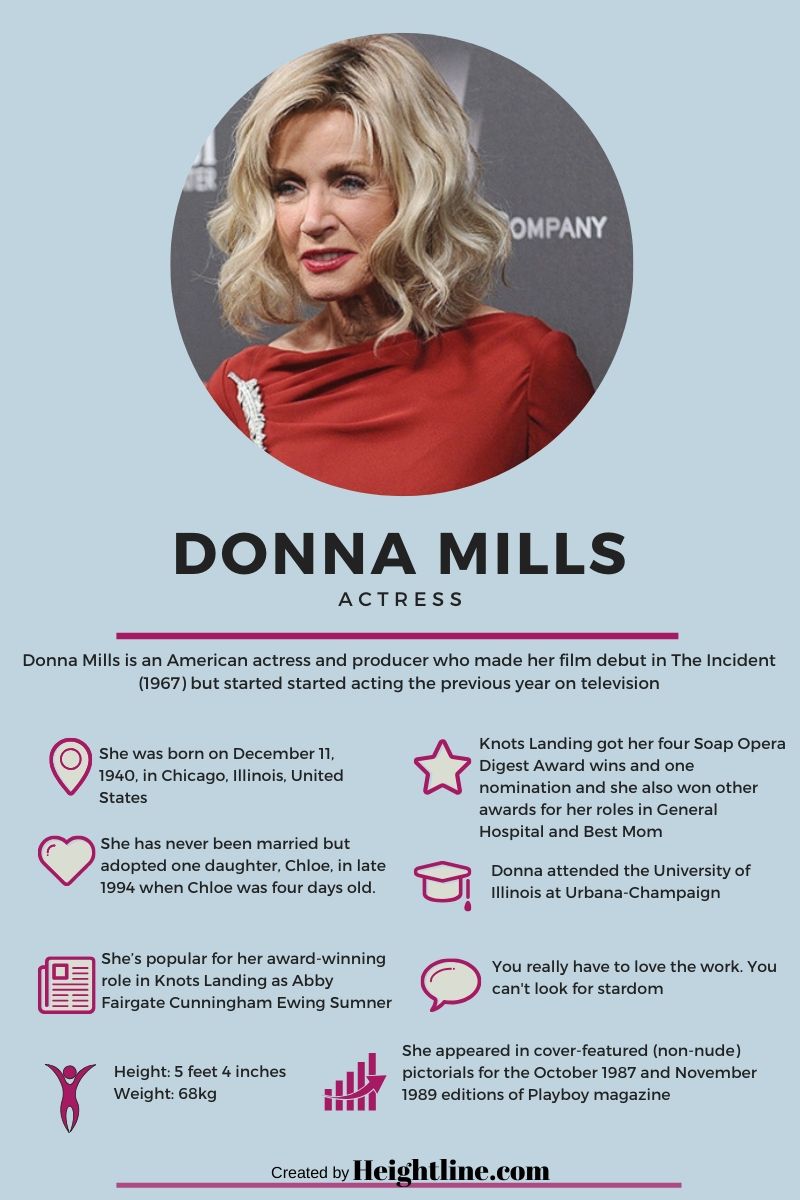 What We Know About Donna Mills’ Acting Career

Like most actresses, Donna Mills began her professional acting career in Theatres. She had her first acting role in a theatrical production called Come Blow Your Horn. Later on, she moved to New York to take part in another stage production titled My Fair Lady.

In 1966, fortune smiled on her as she landed her first TV role in The Secret Storm. She portrayed the character of Rocket for six months in the soap opera before making her cinematic debut in The Incident, the following year.

In the same year, she returned to the theatre to take up the role of Sultan of Bashir’s wife in Don’t Drink the Water and equally became a regular in the series, Love Is a Many Splendored Thing, from 1967 to 1970. She further picked up roles in Love American Style, Play Misty for Me, The Good Life, Gunsmoke, Live Again, Die Again, Rolling Man before becoming globally known as Abby Cunningham.

She played Abby’s character in 236 episodes of the soap opera, including comebacks for the final episode in 1993, and reunion miniseries in 1997 after ending her role in 1989. Her outstanding performance in the soap opera fetched her three Digest Award for Outstanding Villainess and a TV Land Award. Thereafter, Donna Mills continued appearing in both soap operas, movies, and TV shows.

Is Donna Mills Married or Dating Anyone?

Over the years, Donna Mills has enchanted her fellow actors with her stunning beauty. She has dated quite a few but has never been married. Since 2009, she has been in a long-term relationship with actor and producer, Larry Gillman. Larry is a New York City-born movie producer known for his roles in The Texas Ranger, H. O. T. S., The Woman in Red, and The Terror Within II.

The pair have been together for a long time and they presently reside in Beverly Hills, California. Although the actress and Larry are yet to make it down the aisle, they are not in a hurry at all as they haven’t disclosed plans of taking their relationship to the next level anytime soon.

Before her relationship with Larry, Donna was romantically involved with actor Richard Holland, whom she also dated for a very lengthy period (1981 to 2015). During their time together, they showed up at several social functions, including the 44th Annual Golden Globe Awards held in January 1987, and Al Pacino Stars In Oscar Wilde’s “Salome” in Los Angeles on April 27th, 2006. However, when their relationship turned sour, the couple decided to go their separate ways in 2015 after being together for over three decades.

Her Daughter Chloe Mills Is All Grown Up

Donna Mills has been experiencing the joy of motherhood since 1994 she welcomed little Chloe Mills into her life by becoming her adoptive mother. Since then, she has never failed to express her joy in having such a stunning damsel as a daughter on her social media handles, mostly during her birthdays.

Alongside her beau, Larry, Donna now has a loving family unit that means so much to her. Despite having a veteran actress as a mother, Chloe has decided not to follow in the footsteps of her mom and has ventured into modeling. She is associated with Red Model Management situated in New York City.