Who are LazyTown Cast Members and Where are They Now?

By Uwa Echebiri
Showbiz and TV

Icelandic children’s educational musical comedy program titled LazyTown made the childhood of many, who are now well into their twenties. The animated series, which was based on Áfram Latibær!, a children’s book from 1991, premiered internationally on Viacom’s Nickelodeon on the 16th of August 2004. LazyTown, which had ensemble cast members, became both critically acclaimed and commercially successful. The show ran for 4 seasons, completing 104 episodes, with the last episode airing on October 13, 2014.

LazyTown produced many spin-offs, including LazyTown Extra, a short-format TV program created with younger viewers in mind. Although the show has long ended, adults still find themselves re-watching episodes of their favorite childhood show on YouTube. One of the most liked characters on the show was Sportacus. The role was played by Magnús Scheving, who is an aerobic champion, as well as the show’s creator.

LazyTown Characters and the Actors that Played them

Let’s take a look at the LazyTown cast members, the actors that played them, and how their careers have developed since the show ended.

The animated series was created by Magnus Scheving, who is also an Icelandic athlete. Although he excelled as an aerobics athlete, his drive to make an impact in the lives of children, led him to write a children’s book. The book, entitled Áfram Latibær, is about the importance of kids living a healthy lifestyle. It was later adapted into an animated series, LazyTown. After successfully building LazyTown into a franchise, Maggie stepped down from his position as LazyTown Entertainment’s CEO in February 2015. He then turned his focus towards managing ROK restaurant, a Scandinavian/seafood restaurant in Reykjavík.

Icelandic actor Stefan Stefánsson was active in theatre, TV shows, and film, however, his role as villain Robbie Rotten in LazyTown was his most outstanding. About two years after LazyTown ended, Stefánsson, at the age of 41 was diagnosed with pancreatic cancer. After having an operation on his liver, Stefánsson was in August 2017 said to be cancer-free. However, in March 2018, it was announced that the sickness had returned and was inoperable. He now has to hope that chemotherapy can keep him alive for long. Stefan is married to actress Steinunn Ólina Þorsteinsdóttir and they live in Los Angeles with their three kids. Mauriello played the role of the pink-wearing Stephanie for seasons 1 and 2, before leaving the show as a result of having overgrown the role. Since leaving LazyTown, no information about Mauriello has surfaced on the media. Maybe she decided to quit acting? The last time she was seen in the media was when she and Chloe Lang made a video, calling on LazyTown fans to make donations for Stefan Stefánsson’s health. Julie Westwood was an established British voice actress and puppeteer, even before joining LazyTown. Since LazyTown ended, she continues to lend her voice to animated characters. Westwood resides in Bolton, the United Kingdom, with her two sons Tom and Nigel. Chloe Lang was chosen to replace Julianna Rose Mauriello for the role of Stephanie; amazingly, she did justice to it. While on LazyTown, Lang acted in Mask Face (2011) and My Brother Jack (2013). However, since the show came to an end, nothing has been heard about Chloe’s subsequent endeavors. LazyTown was the only gig this Icelandic puppet designer and puppeteer was ever known for. While nothing has been heard about him in the mainstream since LazyTown ended, Thor is probably busy with his Wit Puppets entertainment company that is based in Iceland. After her LazyTown gig ended, Sarah began playing the role of Phoebe Furchester-Fuzz, the protagonist in The Furchester Hotel, the spin-off of Sesame Street. The show continues to air on several networks, including CBeebies, Spacetoon, and Nick Jr. 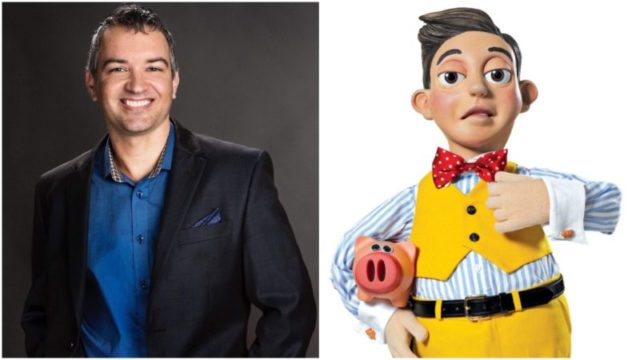 After his work with LazyTown, Jodi continued to work as a puppeteer and voice actor. Unlike most LazyTown cast members on this list, Jodi keeps an active Facebook page, where we got to discover that he lives in the US and hosts Story Story Night; a live storytelling program in Boise. He also works as a Program Coordinator for a non-profit organization, Surel’s Place, an Idaho-based modern live-work space for professional artists. Feldman was among the LazyTown cast members and he played the role of an old-fashioned Mayor Milford Meanswell, who is in love with Miss Busybody. Known for his catchphrase, ‘oh my,’ he is also Stephanie’s uncle. As a result of the love he has for his niece, he always calls Sportacus to help, whenever Stephanie is not happy or is in trouble. Since his days on the show, nothing much has been heard of Feldman’s recent endeavors. Asides the show, Feldman has featured on other shows such as Oh Noah!, Between the Lions, among others. Garcia also played the role of Trixie. Her other notable role is that of Mama Bear in Shrek the Musical (2013). She continues to lend her voice to other animated characters. In 2016, she voiced Ripple/Chompy in the TV series Splash and Bubbles.