Everything We Know About Dwayne Johnson’s Height, Weight And Body Measurements

Though most fans and followers quickly picture a muscle-toned guy in the wrestling ring when they think of ‘The Rock’, those who’ve followed Dwayne Johnson’s career from the early days know better. Since 1990, the former American football player has made career transitions few his type ever dared to, and successfully so. From sports, entertainment, endorsements deals, acting and all, every sphere he’s ventured into seems to accept him with waiting arms. There could be several factors responsible for this but let’s focus on the obvious; his height and body build.

How Did Dwayne Johnson Start? Dwayne Johnson’s height and sturdy build have been an asset to him long before he considered stepping into the ring. Back in the days, young Johnson had a promising football career ahead of him. After getting several offers to play football on several Division-one colleges, he followed his heart and accepted a scholarship from the University of Miami. Johnson played so well as a defensive tackle that the following year, 1991, he was playing at the national championship for the Miami Hurricanes – a great feat for anyone his age. However, life threw curveballs at him from that early stage. After getting hit by injuries a couple of times, Johnson watched in dismay, how quickly he got replaced in the starting lineup.

Fast forward to 1995, Johnson has been armed with a Bachelor’s degree in General Studies in criminology and physiology. But all that wouldn’t add much to his career, he believed. Over the next year or so, he played as a linebacker for the Calgary Stampeders at the Canadian Football League. However, by late 1996, another prospect came calling, Wrestling.

How Did He Get Here?

Dwayne Johnson went all in to pursue a career in wrestling. After enlisting the help of Veteran wrestler, Pat Patterson, Johnson landed a few trial matches. After recording an incredible win over The Brooklyn Brawler and two victories at the USWA World Tag Team Championship twice (alongside Bart Sawyer), Johnson signed up with the World Wrestling Federation (WWF).

Over the next five years, Dwayne Johnson had garnered enough mileage and goodwill that made his brand likable to folks in other spheres of the entertainment industry. By 2000, he started to appear in music videos and even hosted his first episode of the famous show, Saturday Night Live (SNL). Since he stepped into the movie scene, Johnson seemed to have taken his huge fan base along with him. The actor has since appeared in no less than sixty films, TV shows, video games, and music videos. The tipping point came in 2016 when Dwayne Johnson was listed on Time’s ‘100 Most Influential People in the World’. Fans will never forget him for his roles in blockbuster films such as The Scorpion King (2002), Fast and Furious franchise, Jumanji, and much more. There is no doubt that his impressive talent, skill, and commitment got him here. What’s also not in question is the role his height and handsome looks played in all these. But how tall is he by the way?

What You Must Know About Dwayne Johnson’s Height 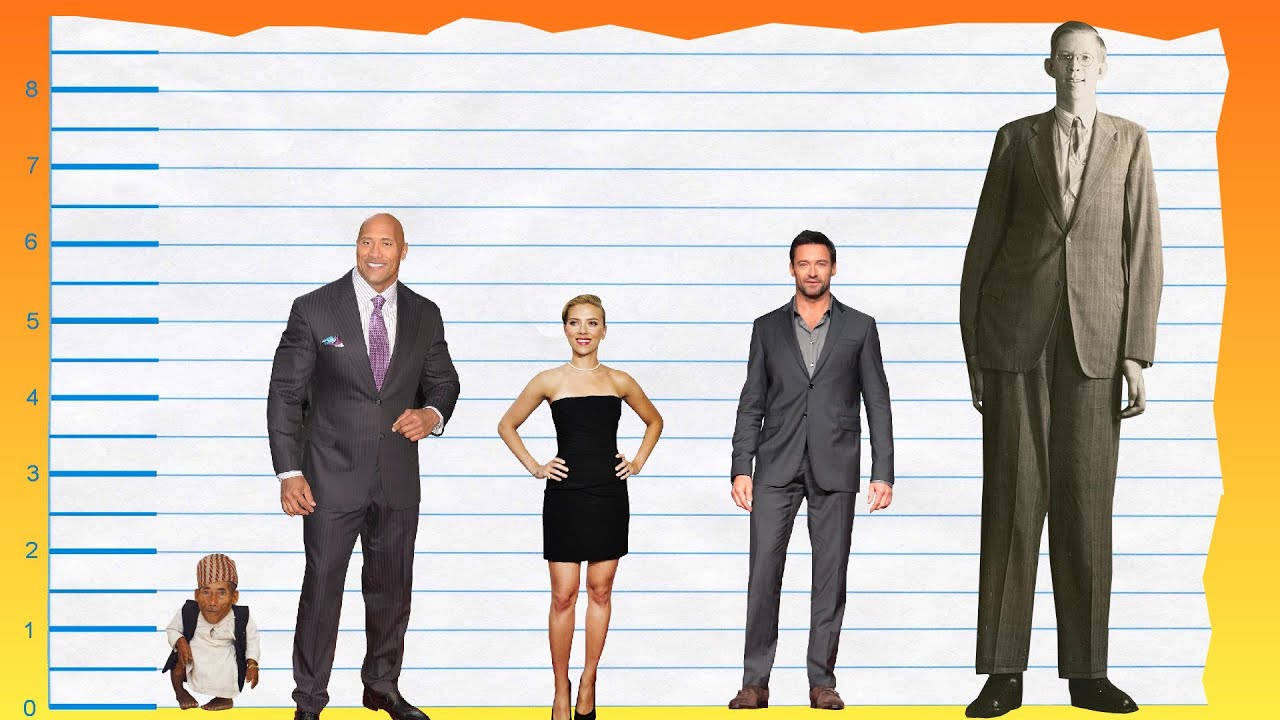 Although hard work and healthy habits played a role, the multi-racial star, however, got his handsome looks and sturdy build from the genes of his parents. It turns out that being Samoan and Nova Scotia puts you in nature’s good book. Back in the day when he had hair, it was dark brown. His eyes are no different either. What about his height?

Judging from looks, Dwayne Johnson is quite tall. Not just his height this time. His entire frame is quite huge, thanks to bodybuilding. So far as we know, Johnson stands 6 feet 5 inches (1.96 meters). Automatically, that puts him in the class of the likes of Chris Hemsworth and the Olympian, Usain Bolt, who stands 1.91 and 1.95 meters tall respectively. With a towering height like that, it’s no surprise that he became the right pick for the roles he played in movies like Rampage, Walking Tall, Hercules, and Jumanji: The Next Level.

But Johnson’s incredible height comes under threat when he stands shoulder to shoulder with the likes of Andre the Giant, Big Show, and The Undertaker. All of who stands at 2.24, 2.13 and 2.08 meters respectively. Nevertheless, you’re sure to find his head sticking up when he’s in a crowd.

Weight and Other Body Measurements