James Byrd Rogers (born 1959) is a 63 years old American man better known for being one of the two sons of veteran TV host and puppeteer Fred Rogers. His father was an award-winning TV host and a puppeteer on the Mister Rogers’ Neighborhood show that aired on PBS from 1968 to 2001.

There is a frustratingly little amount of information about James Byrd anywhere online. Information about his marriage and kids is also not available. However, we have gathered a few things there is to know about him.

James Byrd Rogers was born into the family of Joanne and Fred Rogers in 1959. Details about his date of birth have not been revealed to the public, however, he has a younger brother named John Rogers. His father, Fred, is a renowned TV host, while his mother was a successful pianist. His parents met at Rollins College and got married in 1952.

Byrd Rogers’ family legacy did not start with his father but with his grandparents. His grandfather, James Hillis Rogers, was a very successful businessman. He was president of the McFeely Brick Company, one of Latrobe’s largest businesses.

His grandmother, Nancy Rogers (née McFeely), helped American soldiers from Western Pennsylvania who were fighting in Europe during the Second World War by knitting sweaters for them. She also made herself available to help out at the Latrobe Hospital. Initially interested in becoming a doctor, she, however, settled for a life of hospital volunteering.

He was Raised in a Christian Home

His agenda as an ordained priest was not to pastor a church but to minister to children and their families through television. He regularly appeared before church officials to maintain his ordination. Considering that Fred Roger was a priest, James must have been raised in a Christian home. However, we cannot tell if he still practices Christianity.

James Byrd Rogers adored his father so much and wanted nothing more but to be like him. He began this journey by attending the same college as his father – Rollins College. He, however, later realized that he wanted to be his own self so he made a tough decision to distance himself from his family and build a career outside his father’s successes. 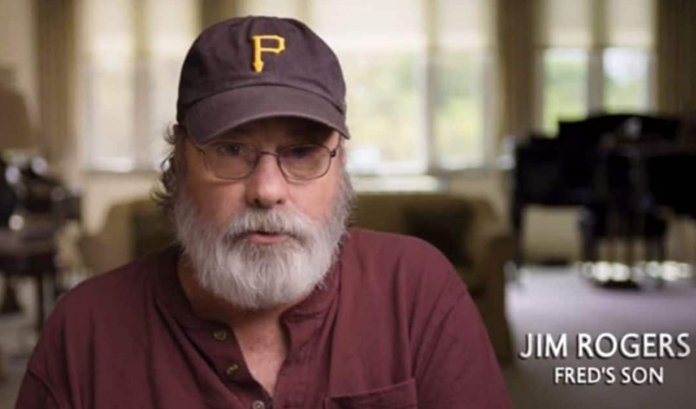 Today, his decision to go against the narrative and be totally independent has paid off as he has become successful and living his life very differently from what many would have envisioned.

He Had a Short Stint as an Actor

Even though his father was a household celebrity, James’ career as an actor was short-lived. He appeared on his father’s show – Mister Rogers’ Neighborhood – several times but only as a kid and teenager. In 1989, he featured in his father’s show again alongside his son, Alexander.

In 2018, he and his younger brother, John, were featured in a documentary about their father titled “Won’t You Be My Neighbor?”. The documentary told the story of the childhood of James’ father. Fred went through a lot of emotional ups and downs as a kid. He shouldered a lot of things on himself, both medically and mentally, and had a difficult childhood. Shy, introverted, and overweight, he was frequently homebound after suffering bouts of asthma.

He was bullied as a child for his weight and called “Fat Freddy.” According to Morgan Neville, director of the documentary, Fred Rogers had a lonely childhood. He wanted to join the military but was unqualified for military service following an Armed Forces physical check on October 12, 1950.

Despite the challenges he faced, he built his career on a comprehensive build-up, bagging multiple positions from secondary school up until very late in his career. He ran for president of the student council, won it, and was sworn in as a member of the National Honor Society, and editor-in-chief of the school yearbook.

James’ Only Sibling is Also Away From the Spotlight

As children, both James and John appeared in the early episodes of their father’s show, but James decided to back off for a while. Meanwhile, John kept his steady devotion to his dad’s business, commuting long distances daily just to come home.

In 2002, John, who was married at the time, made the news for all the wrong reasons as he was reported to have physically assaulted his pregnant wife, Mary. In 2018, John’s son was arrested for abusing hard drugs. After the 2018 documentary about their father, John took a break from the spotlight and resorted to living a low-key life.

How Rich is James Byrd Rogers?

Even though he isn’t a mainstream actor anymore, James Byrd Rogers still holds about $4 million to $7 million in stocks and brokerages, and as such, we can say he is rich. It is rather a surprise that someone who has tasted fame at some point would forgo all of it for a life in obscurity.

He has no social media appearance at all – no official Instagram, Twitter, or Facebook account. Neither James nor his brother is in the limelight at the moment. We can only remember their father for his contribution to the American entertainment industry.

Fred McFeely Rogers (born March 20, 1928; died February 27, 2003), popularly known as “Mister Rogers”, was a legendary American television host, author, producer, and Presbyterian minister. He was the creator, manager, and host of the preschool television series Mister Rogers’ Neighborhood, which ran from 1968 to 2001.

Rogers grew up in a large three-story brick house at 737 Weldon Street in Latrobe. He had a foster sister, Elaine, whom the Rogers family adopted when he was 11 years old. He spent much of his childhood alone, playing with puppets and with his grandfather. He began playing the piano when he was five. Rogers went to the local Latrobe High School.