The Untold Truth About John Smith The Laramie Actor

John Smith was an American actor who lived from March 6, 1931, to January 25, 1995. His acting career basically centered on westerns and he is best remembered for his leading roles as Deputy Lane Temple in Cimarron City and as Slim Sherman Laramie.

There are many people from different walks of life who history will forever be very kind to remember due to the way they went about their business rather than the height they were able to attain.

One of such persons from Hollywood to have not received all the acclaim for his work but was rather exemplary in executing it is actor John Smith who reigned in the 1940s, ’50s, ’60s, and early ’70s. While he appeared in numerous movies and TV shows, Smith is best known for his performances in the western TV series Cimarron City and Laramie. 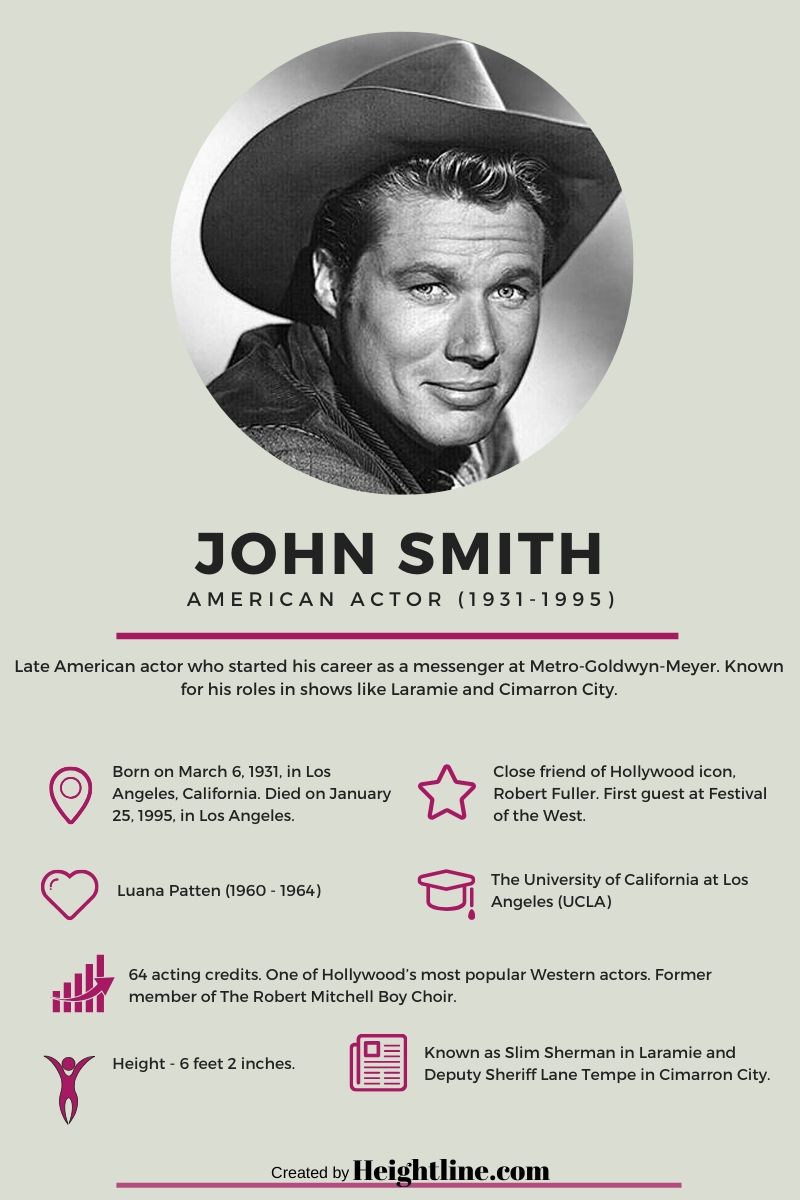 The actor was born on the 6th of March 1931 in Los Angeles, California. At birth, his given name was Robert Errol Van Orden, and he was raised by his parents, Errol and Margaret Van Orden. He is of German and Dutch descent and was a descendant of the last Dutch director-general of New Netherland, Peter Stuyvesant.

For his education, John Smith attended Susan Miller Dorsey High School in LA before enrolling at the University of California, Los Angeles. While it is not clear what he studied at the institution, it is well documented that he was a part of the school’s football and basketball team. He also participated in gymnastics and sang with the dance band.

Smith’s love for music was said to have started as far back as 13 years of age. At that time, he joined the Robert Mitchell Boys Choir, through which he got a chance to appear in several movies, including The Bells of St. Mary’s (1945), as an uncredited member of the choir. His exposure to the camera at such a young age is what many have thought to have influenced his later career choice.

He Rose to Fame with Laramie and Cimarron

John Smith also referred to as Smitty in the acting circle, drew attention to himself in and around Hollywood due to his very smooth voice. Before getting a chance to showcase his talent to the world in a starring role, however, the blond actor had to settle for numerous uncredited roles while also working as a mail boy for the film production company Metro-Goldwyn-Mayer.

In 1952, the company he had worked for as a messenger gave him an uncredited role in Carbine Williams’s film. Two years later, he was able to land his first credited role in The High and the Mighty (1954). He has since then appeared in many movies and TV series, including Seven Angry Men, NBC’s anthology series Frontier, Hot Rod Girl, The Kettles on Old MacDonald’s Farm, Island of Lost Women, and Blood Legacy.

But among John Smith’s myriad of TV and film appearances, his roles in the television shows Cimarron City and Laramie are what gave him the huge popularity he enjoyed in his lifetime. He first joined Laramie when he was cast in the lead role of Slim Sherman in 1959. He played the role from 1959 to 1963 when it was canceled. Through it, however, he got the opportunity to meet his lifelong friend and co-star of Robert Fuller.

For his other popular show Cimarron City (1958-1959), Smith starred as the blacksmith/deputy sheriff Lane Temple. He appeared alongside George Montgomery, who played Mayor Matt Rockford, and Audrey Totter, who appeared as Beth Purcell.

Towards the end of the 1970s, John Smith stopped acting. His final appearances on screen were in the TV series Marcus Welby, M.D., Police Woman, Emergency!, and Walt Disney’s Wonderful World of Color.

Why was Laramie Cancelled?

The American Western television series, which John Smith was one of the original cast members, enjoyed massive attention from when it first came on the air in 1959. By 1963, however, as a result of declining ratings in its last season, which came to an end on May 21, 1963, producers of the show decided to cancel it. The last episode of Laramie that aired was titled The Road to Helena.

What to Know about John Smith’s Love Life

John Smith got married to American actress Luana Patten in 1960. Before their marriage, Luana, who had begun her career as a child model and later child actress, was married to Ronny Huntley when she was just 15. Huntley’s marriage only lasted for five years before it ended and gave room for her to settle down with Smith.

The union between Smith and Patten did not produce any child. There have, however, been many reports indicating that the actor had a daughter from another relationship even though there is no record of the said daughter and her name is not in the public domain.

The Death of the Laramie Actor

John Smith passed away in 1995 at the age of 63. He was apparently sick for a while as the cause of his death was given as a combination of cirrhosis of the liver and heart problems. He died at his Los Angeles home and was cremated afterward. The ashes of the talented Cimarron City actor were then spread at sea.