We hope you haven’t had enough of the comedian, because we are more than ready to give you some more information on; Stephen Colbert’s wife, family and kids. We have constantly seen him on our TV screens, it would be a breath of fresh air to look beyond the screen and meet the members of his family, beginning with his significant other.

The 23 years of Stephen Colbert and Evelyn McGee-Colbert’s marriage are undoubtedly solid proof that they have one of the longest lasting marriages that has been subject to the public eye. To top it off, there is a love story involved. As dorky as he may seem sometimes, Evelyn, fondly referred to as Evie by her husband, was not his first and only lover. The comedian was in a long-term relationship with a woman named Ann. 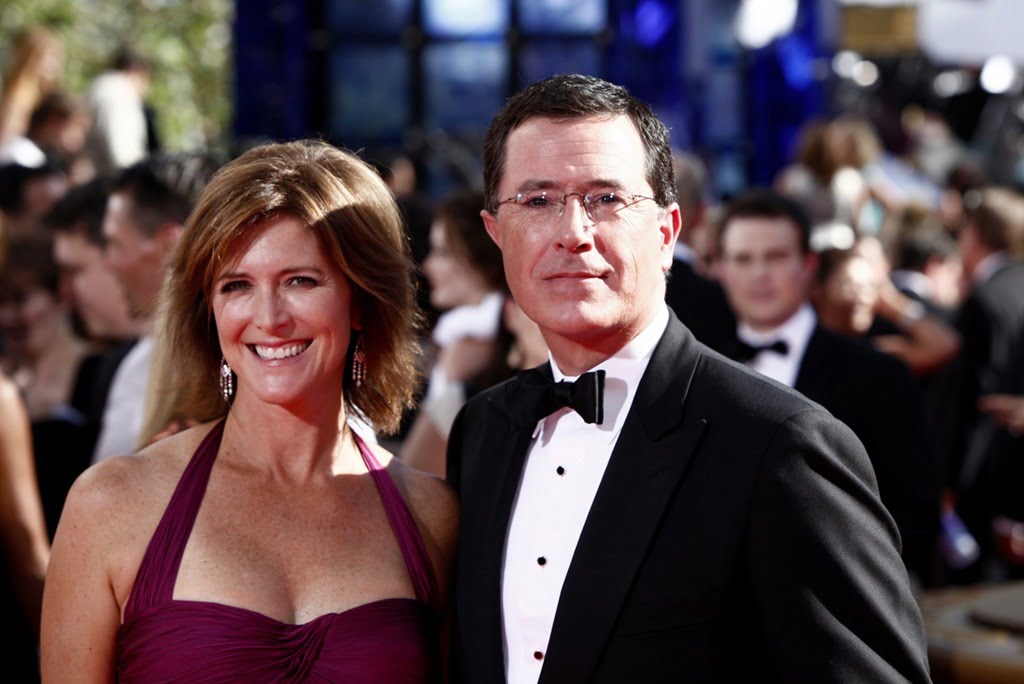 Like some women today, who take to making ultimatums in order to move a relationship forward, Ann threatened to break up with the TV show host if they did not take their relationship to the next level, the next level being marriage.

Stephen flew home to South Carolina to see his mother and gain some direction. According to him, within five minutes of speaking to her, he decided to break up with Ann and soon after, at a concert his eyes wandered and landed on a beautiful woman. Of course it was Evie, the two even realized they had grown up together and according to Esquire, ‘Then, with the fateful intervention of a poet’s son and a smattering of The Odyssey, it was clear the stars aligned between the two of them.’

The two have been married since 1993 and are still waxing strong. She is an actress and even played Stephen’s mum in the movie, ‘Strangers With Candy’. She has now donned the title of a ‘stay at home mom’, this does not stop her from putting down the law, as her husband is not allowed to bring his work home. There are no sarcastic, snarky characters allowed in the Colbert residence.

She is also known for her cameo in ‘The Hobbit: The Desolation of Smaug’ (2013).

The 52 year old comedian is actually the youngest out of 11 children.  Colbert and his siblings, in order from oldest to youngest, are James, Edward, Mary, William, Margo, Thomas, Jay, Elizabeth, Paul, Peter, and Stephen of course. His father, James William Colbert Jr. was quite accomplished in his field, being a doctor and medical school dean at more than a couple universities. He served at Yale University, Saint Louis University, and finally at the Medical University of South California where he also served as vice president for academic affairs. Colbert’s mother, Lorna Elizabeth Colbert did what any woman with 11 children would do and maintained the role of a home maker. Tragedy struck the Colbert home when Stephen was just 10 years old, on September 11, 1974.  His father and two of his brothers, Peter and Paul, were killed in the crash of Eastern Airlines Flight 212 while it was attempting to land in Charlotte, North Carolina. It’s no mystery now why his sons are named Peter and Paul. Colbert’s mother passed  away 39 years after that, on June 12, 2013, at the age of 92 after a period of illness.

The TV show host has three kids with his wife Evelyn, their first child and only daughter is Madeline, 20,  next is Peter who is 17, and then John who is 14 years old. It is no doubt some of us envy these kids for growing up in a house of comedy, if we could call it that. Colbert did mention during one of the episodes of ‘The Daily Show’, that his wife and him rely just as much on laughs in their parenting. When they were younger, Stephen did not let his children watch, ‘The Colbert Report’, in relation to this he further explained saying, ‘kids can’t understand irony or sarcasm, and I don’t want them to perceive me as insincere.’ We are sure they have grown past that and moved on to more fun things for instance, the actor alongside his, sons and his wife had an awesome cameo in ‘The Hobbit: The Desolation of Smaug’. Now we really wish we were members of the Colbert family.