We Bet You Didn’t Know These Things About Ronnie Mund Ronnie Mund is an American radio personality and professional limo driver known for his services on The Howard Stern Show. Ronnie the Limo Driver, as we have come to know him, serves as Stern’s driver and bodyguard as well as head of security for the Stern show complex.

Beyond his work with Stern, Mund is also an actor who has appeared in a number of Hollywood productions such as the 1997 film, Private Parts, the 2014 comedy-drama My Man is a Loser, and Limitless (2015).

He is a very interesting individual who even after many years of being in the eye of the public, still has so many things about him unknown. Here are some of the most interesting things to know about him. 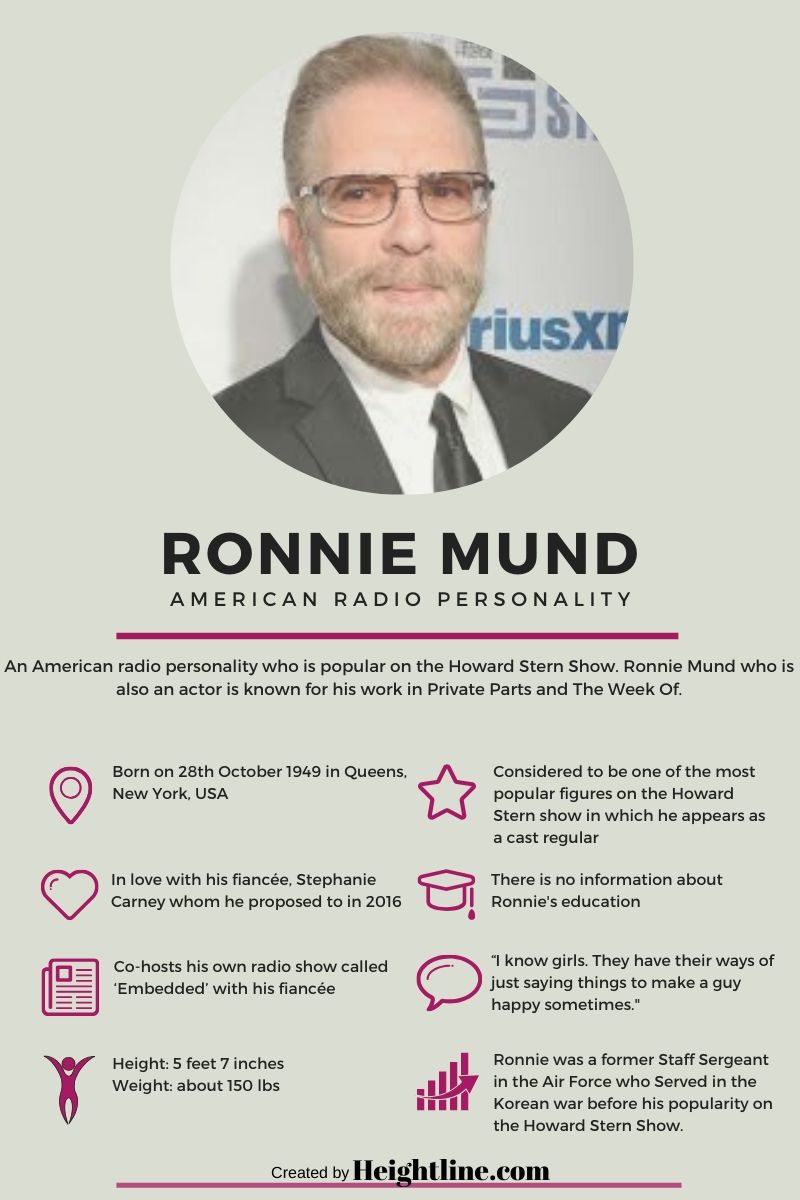 The professional limo driver was born in the United States of America on the 28th of October, 1949 and named Ronald Mund. Before he got on the Show as behind-the-scenes personnel, Stern’s chauffeur in 1986, he had a career in the military and almost became a police officer but ultimately decided that driving was his calling and started the limo business in turn.

Although he does not appear regularly on the show, Ronnie is an on-air personality nonetheless, at least in the Stern world. The regular casts include the main man Howard Stern who is the host, co-host and news anchor Robin Quivers, writer Fred Norris, show announcer George Takei, and executive producer Gary Dell’Abate.

Although he is one of the oldest members if not the title holder on the show and has numerous works to his credit, Mund still has the reputation as one of the most disliked cast members of the show as far as fans are concerned.

Notwithstanding, Ronnie has actually garnered a good fandom including Jimmy Kimmel. Where his personality has failed, his sex tips – which reportedly help fans have a good bedroom time with their partners – have succeeded.

Outside the show, Ronnie Mund in 2011 began touring the United States with other members of The Howard Stern Show on the Ronnie Mund Block Party. The same year, in July, he auditioned for the Wheels sitcom in New York City. He has hosted an event in Jamaica called the Ronnie Mund Jamaican Getaway which lasted for four days in March 2013. Additionally, he works as a spokesperson a gentleman’s club franchise known as Ricks Cabaret.

Ronnie Mund has many nicknames

As a staff member of the popular radio show, he has earned a slew of nicknames in line with his personality therein. They include Ronnie the Limo Driver, Scoresman, Ronnie the midget, Ronnie the Angry Dwarf, and Ronnie the fidget.

How he met Stern

A former military man turned professional limo driver, Ronnie Mund first met Stern after he drove him to a live show. Following the ride, he hand-delivered a crayon, “Thank You” note, to Stern’s house and was subsequently hired as his private limousine driver and bodyguard. He has since become the oldest and one of the most popular characters on the Show and earns cool cash in turn.

Who is his wife?

Ronnie was married to Bonnie Mund but left the marriage according to his former wife on her Twitter page, at the age of 65 to play around with whores and strippers.

However, he has since gotten into another committed relationship with Stephanie Carney whom he engaged in 2016 in a romantic way. He popped the question over the phone live on the Stern Show having dated her for a long time. They eventually got married in late 2018. The two first met in a bar where Stephanie used to work.

The huge age difference between the couple

The golden-tressed Carney was born in 1983 and is 33 years his younger but doesn’t view the huge age difference as an issue, after all, she has always taken a liking to older men though Ronnie remains her oldest. They have been together for more than a decade already.

Stephanie Carney graduated from a veterinary technician program in 2018. The duo co-hosts a radio show called Embedded and has also appeared together in several other shows.

Ronnie Mund’s net worth and salary

According to sources, the radio personality and professional limousine driver has amassed an estimated net worth of $500,000. His salary details are however not known.

What is his height?

For a bodyguard, Ronnie Mund is not the tallest individual. He stands at only 5 feet 7 inches or 1.7m tall.