Who is Richard Brake the Actor Who Plays the Night King in Game of Thrones?

One of the biggest and most successful television show from the stables of HBO is the critically acclaimed Game of Thrones TV series. Some even regard GOT as the greatest TV series ever made. GOT has been said to be successful on various parameters – viewership, piracy rates, earnings, and awards. As the seasons kept on coming out, the viewership rates kept hiking. GOT turned several upcoming actors and actresses to popular acts. One of them is Richard Brake.

He is among the several characters who made the GOT series a must-watch. His character is the dreaded villain, The Night King, a common enemy to all those interested in the throne. He was also the first of his kind, The White Walkers. He was created by the Children of the Forest to defend them from the First Men but The Night King and his minions rose up against their creators and waged war. At the end of the series, The Night King was killed in what was a very long night, especially for viewers. Two actors were cast to play the role of The Night King, one of them being Richard Brake. This article will unveil who he is and much more.

Richard Blake is popularly known as an actor and has appeared in a couple of movies, TV series, including the blockbuster TV series, Game of Thrones. He was born on November 30, 1964, in Ystrad Mynach, Hengoed, Wales, however, he is a British-American. His family relocated to the USA and resided in Atlanta in 1967. He named Richard Colin Brake at birth and grew up in North Carolina, Georgia, and Tennessee.

He attended Duke University and Academy of the Science of Acting and Directing in London as well as Michael Chekhov Studio in New York City, where he studied acting. He began his career on screen in 1993 and since then has been in a handful of movies and television shows. Richard is popular for his appearance in Batman Begins (2005) and 31 (2016). He has received some accolades for some of his outstanding performances, such as Best Supporting Actor at the Fright Meter Awards, Best Actor – Feature Film at First Glance Film Festival Los Angeles as well as other award nominations and wins.

His Role as Night King in Game of Thrones 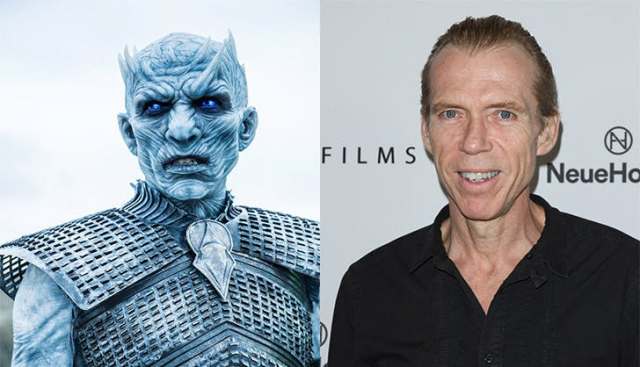 GOT fans were advised by reviewers while the show was on not to get too attached to the characters, as HBO made it a habit to recast them. While some of the changes were noticed by a lot of people, some weren’t. One of such largely unnoticed cast change is that of the Night King. In the earlier seasons, the Night King character was played by Vladimir Furdik.

However, in seasons 4 and 5, Vladimir was replaced by Richard Brake. There were no reasons given by HBO for this replacement. The role was given back to Vladimir in the sixth season which he continued until the end (death) of the character in season 8.

Richard Brake is currently divorced from a certain Rachael whose identity remains obscure. They got married in the ’90s and gave birth to their first son, Ryan, in 1999. Their second son, Henry came on August 20, 2002. Richard and Rachael were hardly seen together on red carpets or on social media. The date of the divorce and the reasons behind it are not certain at this time.

Also, there were accusations pointing to the sexuality of the actor as his closeness to his long-time friend, Eddie Marsan raised eyebrows. However, both men have come out to say that they are not gay. Richard has been involved with other women since his divorce but no names have been mentioned.

How Rich is the Night King Actor?

This Game of Thrones star has been in a lot of movies and television shows since the 1990s and is still acting till today. He has had some remarkable performances that have earned him recognition worldwide. His hard work has paid off in both fame and fortune. Richard Brake is said to be worth $4 million.

Quick Facts About the TV Series – Games of Thrones

The Game of Thrones series is based on George R. R. Martin’s series of fantasy novels titled A Song of Fire and Ice. All his novels were best sellers and formed the blueprint of the series.

Vladimir Furdik didn’t only play the role of the Night King in some of the seasons on this show he also played some other minor roles. He was also the White Walker who Jon Snow killed at Hardhome. He equally played the role of a stunt performer in a fifth season episode titled “Sons of the Harpy.”

The Dothraki language spoken on the show is not a real language as it was created for the show by the shows’ linguist, David J. Peterson.

Tyrion Lannister played by Peter Dinklage, appeared in more episodes than any other cast member. Peter starred in over 60 episodes of the series’ 73 episodes.