We all remember little Hannah Montana, oh those fond memories of rushing home to see what trouble she had gotten into with her best friend, Lily (Emily Osment). Well that version of Miley is certainly buried deep in her past, as the actress has gone through great lengths to redefine herself. There was even a whole episode about her transition on the show, ‘Hannah Montana’.

It was a bumpy ride, but with raised eyebrows we can say that the starlet succeeded. Let’s take a peek.

46 tattoos, just in case you were wondering how many she has, that’s how many the starlet had at last count. Pop culture is increasingly embracing tattoos and they have become a major form of expression.

Miley’s tattoo journey started when she was just 17 and we assume it was not hard to get parental consent, especially when the meaning behind the tattoo was quite a noble one. Initially, rumor had it that the first of Miley Cyrus tattoos was a tribute to her best friend, Vanessa.

Later, it was clarified that Vanessa was actually a nine-year-old that Miley met at a hospital, the little girl was battling with cystic fibrosis and sadly she lost the battle. They instantly shared a connection which made Miley refer to her as one of her best friends.

Also, Miley’s two grand fathers passed a way from lung cancer, and this put some things into perspective for the starlet, or did it? In relation to this, she said, ‘It reminds me not to take things for granted. I mean breathing – that was something none of them could do, the most basic thing. And I put it near my heart, because that is where they will always be.’

The recent pictures that surfaced showing Miley smoking have raised eyebrows about how genuine she was about the “just breathe” tribute and what it stands for.  The tattoo is located on the stars rib cage, close to her heart.

Let’s move on to the fourth one. In December 2010, Miley added to her then small collection, a tiny cross tattoo on the ring finger of her right hand. Some say it’s a tribute to God, since she was raised in the Christian faith. Apparently, Miley isn’t the only person who loves Miley Cyrus tattoos, celebrities like Vanessa Hudgens expressed their enthusiasm, Vanessa said, ‘I want to get a little cross here [on my pinky finger]. I was raised Catholic. Miley [Cyrus] has one there as well and it just looks so cool, like ‘I’m a good girl ’cause I have a cross.’

Demi Lovato also got a cross tattoo the following year, but speculations are still being made as to whether it was inspired by Miley.

Forget matching T-shirts, matching tats are they way to go, or at least the way Miley and her boyfriend went. OK, here’s some additional information; the sugar skull is a symbol that is linked with the Day of the Dead- a Mexican holiday. Weird choice, but here’s a little more info to put it all into perspective. The Day of the Dead is a holiday celebrated throughout Mexico and across the globe which provides an opportunity for family and friends to pray for their departed loved ones. So there we go folks, skulls aren’t always evil.

Need we say more? We shouldn’t, but we will anyways. At first glance the red inscription could be passed off as a temporary tattoo, it reads ‘BAD’. If there ever was a ‘good girl gone bad’, it’s Miley Cyrus and she has got the tattoo to prove it. The tattoo wasn’t entirely a statement, it was also inspired by Michael Jackson’s seventh studio album.

It’s a popular Australian yeast paste, her boyfriend is Australian, we are getting the feeling that Miley got this one as a tribute to Liam, it’s weird to get tattoos of your boyfriend’s favorite childhood snack on your arm, but why not?

This is the stars most recent tattoo and it’s just three months old, but we see a lot more ink in Miley’s future.

Even more popular than the topic of Miley Cyrus tattoos, is that of Miley Cyrus tongue. Since her Hannah Montana days, the actress has often stuck out her tongue but definitely not as much as she does now.

As we have recently come to discover, there is a method to the star’s madness. It’s not all for attention and we think you should hear it in her own words.

She explained to Rolling Stone Magazine, ‘I just stick my tongue out because I hate smiling in pictures. It’s so awkward. It looks so cheesy. Now people expect it — like, ‘Put your tongue out! Every other girl is so serious – like, this is my moment on the red carpet, I’m in my ball gown, looking pretty. There’s something empowering about what I’m doing right now,’ she added in conclusion,’Because there’s not one thing that defines what beauty is.’ So if that tongue straight up pissed you off, you have to get used to it because Miley is here to make a statement.

Get ready for some pretty graphic pictures people, because when have we known Miley Cyrus to be shy and demure? The actress got a whopping 5 teeth removed in March, 2015 and she was not ready to get through the ordeal alone. Along with the pictures on Instagram, she posted, ‘Twas in da best handzzzz doe. Nurse @cheytom & Dr. @stellamaxwell took goooood currrr of me & muah pearly whites,”She also posted a pic of her with her mom, Trish Cyrus, sitting next to her. 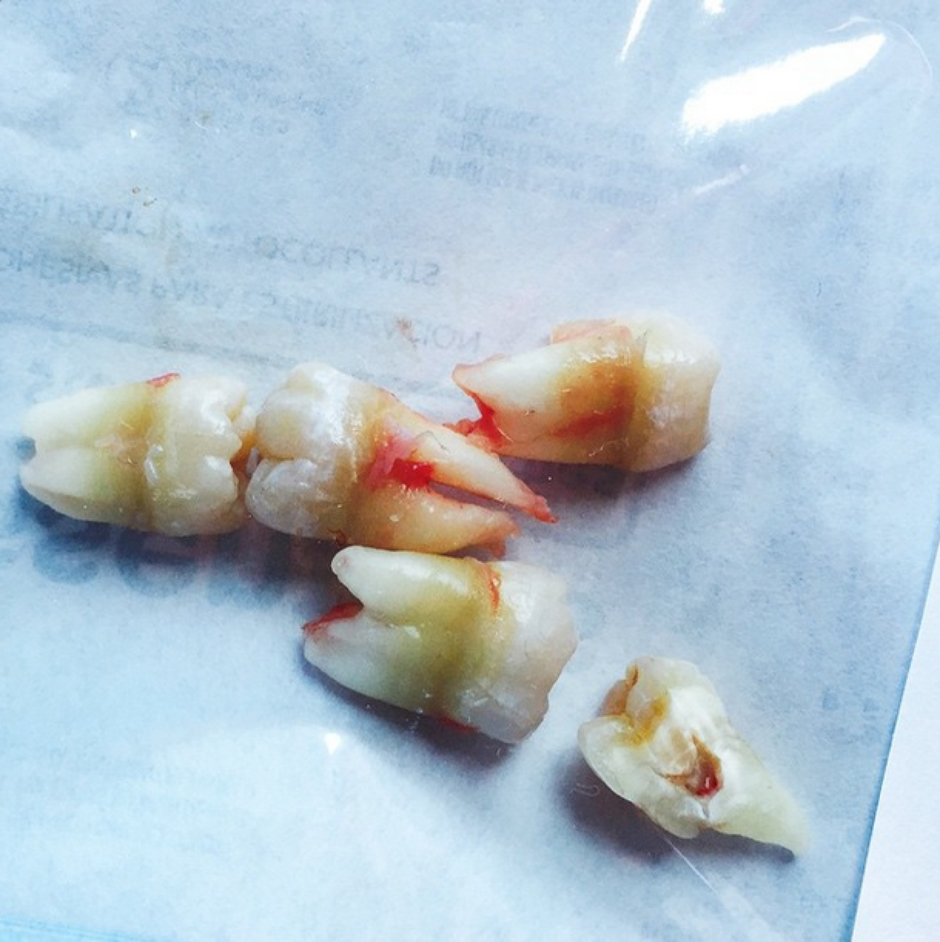 Rather than showing you that boring old picture, here’s some love from Miley Cyrus and her pearly whites.