Miley Cyrus’ List of Ex-Boyfriends: Who Is She Dating Now?

By Obianuju Okafor
Family and RelationshipMusicians

The multi-talented star has maintained a fair level of success over the years and has successfully shed her teen idol image to emerge as a highly-sexual persona in her adulthood much to the dislike of the parents of the very young fans she had as a child actress.

Since she transitioned into an adult actress, her personality has been the subject of many controversies as she has not let the fact that she has a younger fanbase stop her from living her life to the fullest.

Taking a closer look at the interesting relationship timeline of the highly controversial international pop star has been rather intriguing seeing as she has been outgoing and open about her love life.

Mainly known for her long-term relationship with fellow A-lister Liam Hemsworth, Miley Cyrus also has a long list of other famous ex-lovers having had a history of being totally unable to keep her love life away from the prying eyes of the public.

Who Is Miley Cyrus’ Boyfriend? Based on information available to the public, Miley Cyrus is currently in a relationship with Cody Simpson. Back in 2012, Cody did an interview where he referred to Miley as his celebrity crush. While many thought it ended there, it obviously did not as a few years later in 2015 he again referred to her as his BFF and revealed that she has been a huge help and inspiration to him.

It came as a surprise to many in 2019 when the two were spotted sharing a kiss just a few weeks after Miley broke up her very short relationship with Kaitlynn Carter. Following all of the buzz the photo created, Miley posted a confirmation on her Instagram handle.

Since that October of 2019, Miley Cyrus and Cody Simpson have been the it couple serving all-time couple goals with their steady public display of affection amid the rumors that they moved in together after only dating for two weeks. The couple seems to be having the time of their lives. Miley Cyrus’ relationship with Kaitlynn Carter was something many people did not see coming. First, they were spotted on vacation which no one attached any meaning to especially because none of the two had any history of being bisexual. Next, the news of Miley’s separation from Liam hit the news making people wonder what was going on and finally, pictures of the ladies making out confirmed what everyone was thinking.

While the very short-lived relationship lasted, the two were all over each other in typical Miley Cyrus fashion which prompted Liam to file for a divorce. Sooner than many expected, however, the relationship which began in August came to a quick end in September.

Miley Cyrus’ most recent ex is Liam Hemsworth who she used to refer to as the absolute “love of her life”. Their relationship began in 2009 when the duo co-starred in the film The Last Song.

For the first 3 years, their on-and-off relationship was a favorite among fans and it gained much media attention. The picture-perfect couple took their romance to a whole new level when they announced their engagement in June 2012 after which they moved in together in Los Angeles. However, while fans were eagerly anticipating the wedding bells of this Hollywood royal couple, trouble began to brew in their paradise. The couple parted ways the following year and also called off their engagement in September 2013.

In early 2016, there were wide speculations that they had gotten back together and had rekindled their old flames after they were spotted spending time together at Hemsworth’s home in Malibu.

The rumors gained momentum by the reappearance of an engagement ring on Miley Cyrus’ ring finger. The singer eventually authenticated the rumors on The Ellen DeGeneres Show by confirming that she was indeed back with Hemsworth and that they had gotten re-engaged.

The engagement endured this time and they were steadily together until December 2018 when the two finally got married. There did not seem to be any real issues to prepare fans for Liam and Miley’s separation when it happened, but by August 2019, they reportedly separated and in the same month, Liam filed for a divorce. 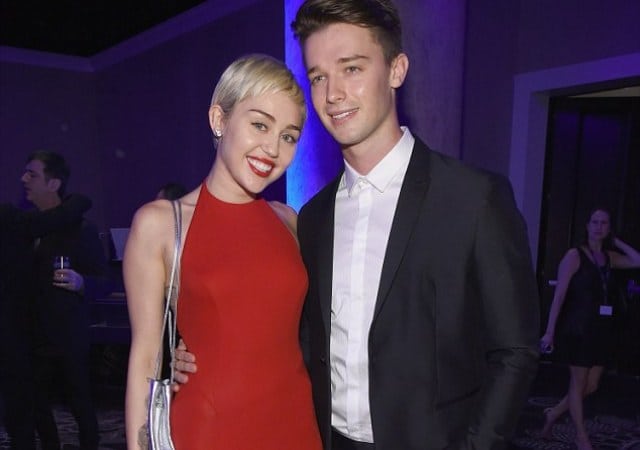 During her 2-year hiatus from Liam Hemsworth, Miley Cyrus had a brief relationship with actor and model Patrick Schwarzenegger. The duo got together late in 2014 followed by several months of highly public romantic involvement.

However, their romance was rocked by cheating allegations in March 2015 after pictures surfaced of Patrick partying with his ex-girlfriend during his spring vacation. The pair initially weathered the storm as they were spotted out together a couple of times afterward. However, that lasted for only a short while as the couple eventually split in April 2015. It is on record that Miley Cyrus and Nick Jonas got together during the early years of their respective showbiz careers. While Cyrus was known for playing the title character in the Hannah Montana musical, Jonas equally became a prominent figure on the Disney channel. As perfect as this teen couple seemed at the time, they kept their relationship totally private.

Unfortunately, their romance was not well-chronicled by the media, no thanks to their high-level of secrecy. But as they say, nothing stays hidden under the sun. Miley Cyrus and Nick Jonas eventually opened up about their relationship years after it had ended.

As revealed in her 2009 memoir Miles to Go, the duo met in June 2006 at a charity event which had several Disney stars in attendance. The talented singer made further revelations about their romance during an interview in which she stated that they remained an item for a little over a year before eventually parting ways on December 19, 2007. Apparently, Nick Jonas is not the only Disney star who had an eye for Miley Cyrus. It is on record that fellow Disney star Dylan Sprouse developed some feelings for the Hannah Montana star after they first met in 2006 as costars on the sitcom The Suite Life of Zack & Cody. However, Nick Jonas came into the picture even before they could start things off.

Dylan admitted during an interview that he and Miley dated for about one day when he was about 11 or 12 years old. According to him, “We met at her set, I believe, and we dated. And then Nick Jonas walked by and it was over,” he joked on Jimmy Kimmel Live! in 2008.

Miley Cyrus reportedly met Thomas Sturges sometime in 2007 when the latter’s mother penned a song for the singer’s Hannah Montana 2: Meet Miley Cyrus album. It remains unclear when they officially hit it off, however, they gained a lot of publicity after some suggestive pictures of the duo surfaced in the media circle.

These photos were supposedly not favorable for the squeaky-clean image which the Hannah Montana star represented at that time and as a result, Cyrus was pressured to end her relationship with Sturges. The duo eventually parted ways in mid-2008. Among the Hannah Montana star’s famous ex-lovers is the handsome model, singer-songwriter and actor Justin Gatson. The pair started dating sometime in 2008, however, their relationship stirred up a little controversy owing to the fact that Cyrus was only 16 at the time and there was also a 4-year age gap between them.

After dating for 9 months, the couple allegedly split in mid-2009 as Cyrus prepared to leave town to go film The Last Song. Though their breakup was mainly due to the distance, it was further complicated by the fact that Cyrus was spending a great amount of time with her ex-boyfriend Nick Jonas.