You may not believe this, but Dwayne Michael Carter Jr., popularly known as Lil Wayne, also popularly known as Weezy, is a family man. Yes, the CEO of Young Money Records has more than a couple of children, all from different mothers and was even once married. Lil Wayne’s daughter, Reginae, is the most popular of the lot but there’s more three more and we are going to meet them all. Well, not in person, just on-screen.

The rapper is a proud father of four, and as we mentioned earlier, they kids all have different mothers. The media shows us a lot of teenage mother’s and its not everyday we see teenage fathers. This makes it almost commendable that he is so open with that aspect of his life, being only 16 when he had his first child. The year was 1998, the date was November 29, Reginae Carter was born to Dwayne Carter and Antonia ‘Toya’ Wright.

We are sure we aren’t the only ones wondering, why Reginae? Well, there are some sentiments involved there, the hip hop princess was named after her father’s late stepfather, Reginald.

Lil Wayne’s daughter, who is popularly known as Nae Nae, is the only girl out of the bunch. The 17 year old obviously follows in ‘daddy’s footsteps’, as she also has musical talent. The rapper and singer is signed to her father’s record label. Up until 2012, she was a member of a teenage R&B group and she also co-wrote a book with Birdman’s daughter, Bria Williams. The book, titled ‘Paparazzi Princesses’ focused on the in-and -outs of having a famous celebrity as a father. 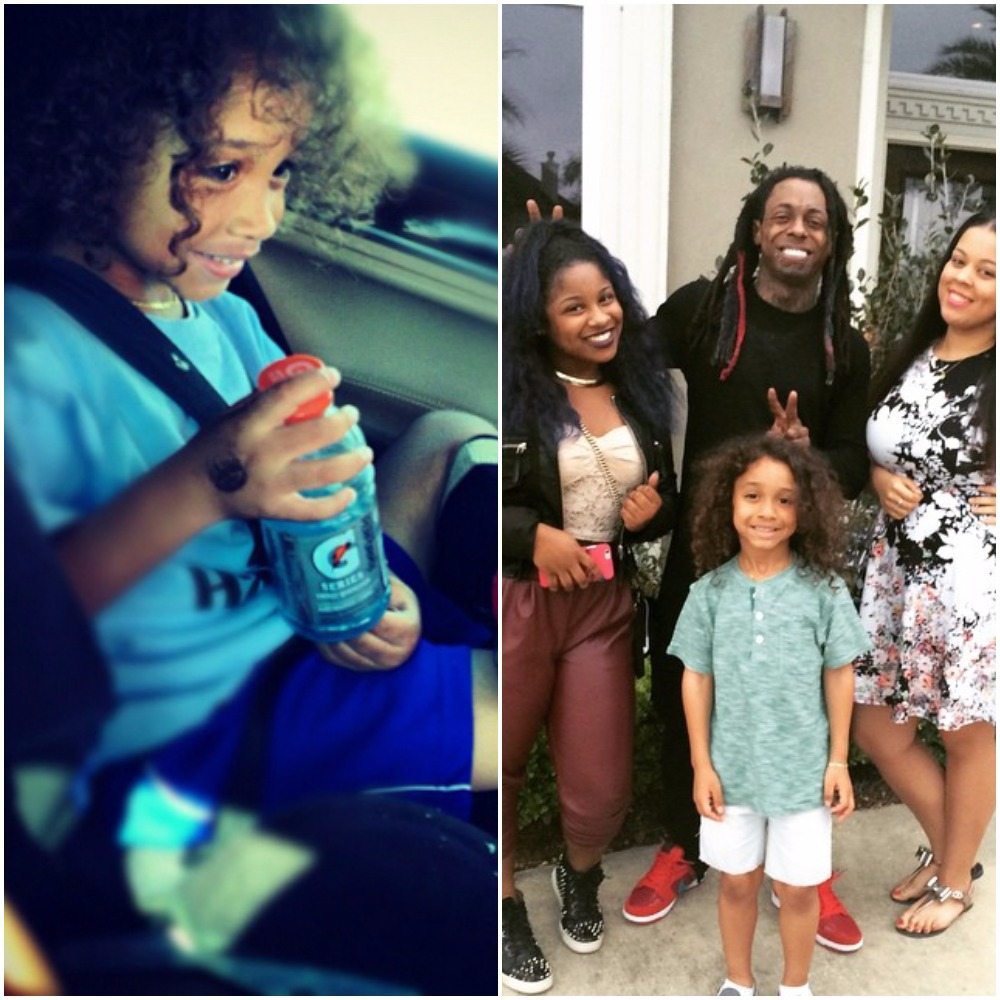 Weezy’s second child, Dwayne Michael Carter III, was born a whole decade after his older sister on October 22, 2008. His mother is Sarah Vivians, a woman the rapper met at one of his concerts in 2005. Lil Wayne has been a doting father to his son and still maintains a good relationship with Sarah, so they can bring their son up well.

The third baby on the list is Cameron Carter, whose mother is the popular actress Lauren London. He was born on September 9, 2009 in Los Angeles. His mother, Lauren likes to keep him out of the spotlight and she is doing a great job, but we know it’s only a matter of time before the paparazzi start over stepping their boundaries. Neal Carter, the baby of the family was born a mere two months after his brother on November 30, 2009. His mother is none other than the singer Nivea B. Hamilton, who once collaborated with Weezy on the song ‘She Feelin Me’. Lil Wayne fondly calls his last son, ‘Meatball. In the same vein as Lauren London, Nivea tries her best to keep Neal out of the public eye.

Over the years, the artist/lyricist has had his fair share of romantic relationships, OK, who are we kidding? He has had some other people’s share too. There have been flings, actual girlfriend’s, a few fiancees in the mix, but only one of these women made it to the finish line as his wife.We doubt that when the 14 year old Antonia ‘Toya’ Wright ( Nee Johnson, formerly Carter) found out that she was pregnant, she knew that it was a stepping stone.  It is no spoiler alert that the marriage only lasted two years.

In 2004, the couple got married, 6 years after they had their daughter, Reginae Carter. They separated and divorced in 2006, this stemmed from personal differences, mostly Toya’s inability to cope with his lifestyle. More specifically, his career kept the artist away from home for long stretches of time, the long distance must have gotten to her.

She moved on to marry Mickey ‘Memphitz’ Wright in 2011, but that marriage also crashed and burned sometime this year. Toya is presently a reality TV star, an author and a business woman. It was evident that both parties were not too happy about it, because the artist’s biological father abandoned them not long after. This is the reason why the artist dropped the ‘D’ from his name and goes by ‘Wayne’. He has no involvements with his biological father and does not want any.

His mother went on to marry a man named Terry, it is evident from some of his lyrics that step father number one tried to be abusive and Weezy came to the rescue. Despite the fact that Terry also left, he bears no grudges and even called him a ‘cool dude’ in a magazine interview. Cita then went on to marry the man Weezy considers his real father, Reginald McDonald, popularly known as Rabbit.

Rabbit was obviously a good to them, he moved Wayne and his mother out of Hollygrove to East New Orleans. He is also one of the main reasons we have ‘Lil Wayne’ today, Weezy’s mother needed a little convincing before letting him sign with Cash Money Records. Rabbit was murdered in the hood when the artist was just 13 years old, his death gave Wayne a reason to make it big. He was also the inspiration behind his first tattoo which reads ‘In Memory Of Rabbit: It’s Up To Me’.

Wayne also considers Birdman, Williams, as his father in a God-father type of way. Birdman owns Cash Money Records, the record label that signed the artist at a young age. The two have since maintained a father-son relationship and with that we end this Carter family reunion.