Is Jeremy Wade Married, How Did He Become A Fishing Legend and What Is His Net Worth?

Jeremy Wade is not and has never been married, neither is he in any known relationship.

His passion for fishing was kindled right from when he was a little boy and with the support of his parents, he continued on that path and eventually established himself as a legend in fishing by going on trips overseas and discovering the world’s rarest species of fishes. He has garnered an estimated net worth of $1.5 million doing what he loves.

Jeremy Wade is one of the people we can call multi-talented. He is a television presenter, an angler, as well as an acclaimed author of books on angling. Famous for his appearance in the television series, River Monsters, Wade has also worked as a tour leader, teacher, art tutor, translator, public relations consultant, dishwasher, and newspaper reporter.

The Brit is nicknamed the River Monster Hunter for his work on the aforementioned TV series where he gets to explore water bodies around the world that have many river monsters like pythons, crocodiles, and other large species of fish living in it. In addition to his work on the River Monsters show, he has also appeared on others like Jungle Hooks, Mighty Rivers, and Dark Waters. 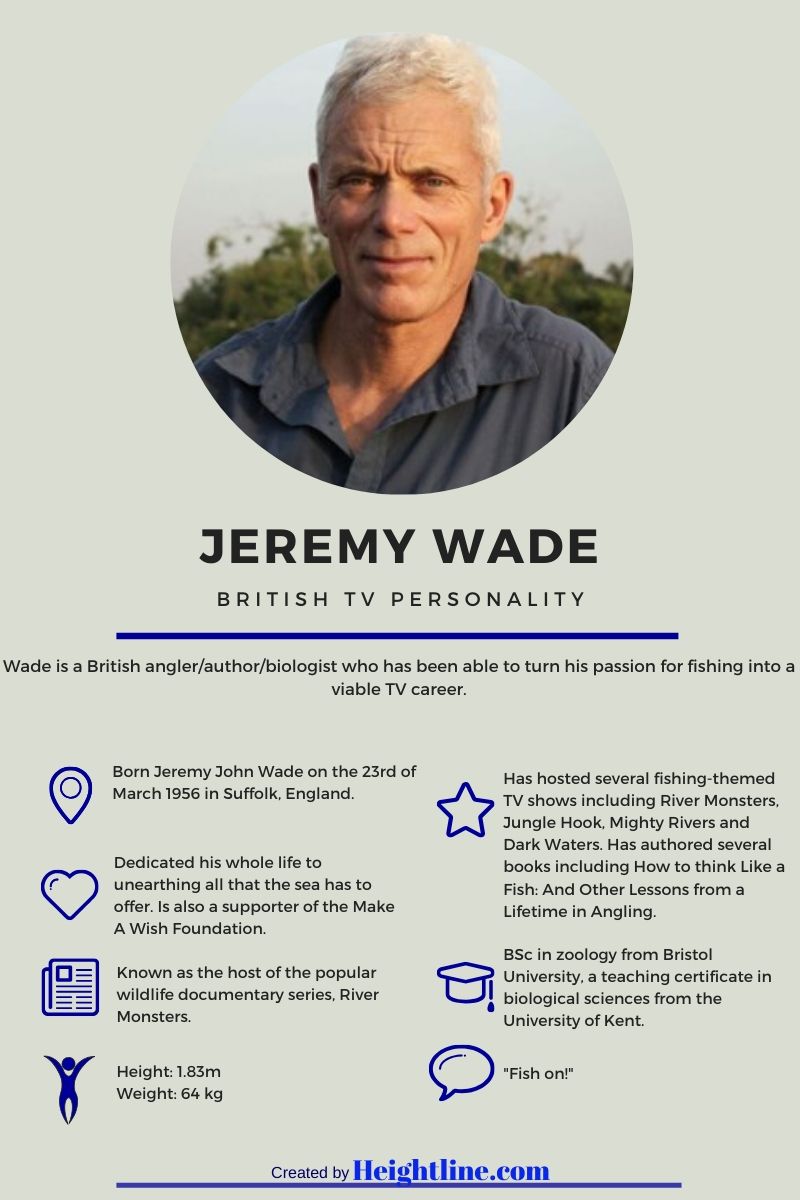 Is Jeremy Wade Married? He Says He Is Single Despite Other Information Suggesting Otherwise

For a few years now, there have been rumors that the reality TV star had gotten married in a secret wedding. The rumors began circulating after pictures of Jeremy Wade getting close to some ladies whose identities are not known went public. One particular photograph that caused a stir is one that featured him with a woman and kids.

But despite what those photos may suggest, Wade appears to still be very much single. This is according to the information found on his personal website.

The famous television personality was born in Ipswich, Suffolk, on 23 March 1956. He grew up with his Vicar father and attended Dean Close School before enrolling and graduating from Bristol University with a degree in Zoology. He further went on to study at the University of Kent where he secured a postgraduate teaching certificate in biological sciences.

Wade appears to have developed his passion for fishing while living with his family on the banks of Suffolk’s River Stour in East Anglia. Although his first attempt to catch a fish at the age of eight was fruitless, further help and guide from his friends eventually saw him make his first catch.

With great support from his parents, Jeremy Wade developed an unquenchable thirst to catch more fish. His desire to do this led him to discover new fishing locations across the country and around the world. He searched far and wide for various species of fishes and water creatures as he went on to make his first oversea trip in 1982 when he went to the mountain river in India.

To fund this hobby that turned to a lifelong obsession, Wade took up a job as a secondary school biology teacher in Kent. His travels have since allowed him to become fluent in several languages, including Portuguese, French, and Spanish.

After returning to England from his first overseas trip to India where he managed to catch an 18-pound Himalayan mahseer fish, Jeremy Wade wrote about his experiences and sent the articles to a fishing magazine. His articles were accepted by the publishers of the magazine, prompting him to consider traveling overseas again and look to fishing as his lifework.

Wade has since that time gone on many trips overseas in search of the world’s rarest species of sea creatures. In 1992, he published his first book, Somewhere Down the Crazy River. His journey on the waters of the world has had him come across animals like the Humbolt squid, bull sharks, giant stingrays, and arapaimas. The angler, however, maintains that hooking Congo’s Goliath tigerfish remains his greatest catch. He described the fish as “a man-sized piranha.”

On a subsequent trip to the Himalayan foothills in India in 2005, the idea for the River Monsters show came to the biologist. During the trip, he heard stories of people going missing on the river as a result of an unknown giant sea creature. Wade thought this would make a great script for a show and thus began investigating. He ended up catching the supposed sea creature which turned out to be a 161-pound Goonch catfish. He used this idea to film in other locations as he created one of the most-watched and most successful programs in Animal Planet’s history.

In 2014, Jeremy Wade made his acting debut as he featured in Blood Lake: Attack of the Killer Lampreys, a movie in which he played the role of Lamprey expert.

#Throwback to one of #JeremyWade’s first #RiverMonsters – and what a monster of a catch it was! Can you name it? #FishOn #fishyquiz #tbt pic.twitter.com/RkO1LyvupJ

How Much Is Jeremy Wade’s Net Worth?

While his annual income is not known to the public, it is no surprise to find out that Jeremy Wade has an estimated net worth of $1.5 million. Journeying across the world, from the heart of the Amazon River in Brazil to the jungles of the Congo and everywhere in between, Jeremy Wade has massively benefited from what he describes as a passion turned career.

His net worth, which is way higher than that of any secondary school biology teacher, is high thanks to the success of his shows and what he has recouped from selling his different books that include River Monsters (2011) and How to Think Like a Fish: And Other Lessons from a Lifetime in Angling (2019).

Not one to keep his earnings to himself, Wade looks to contribute to good causes around the world when he can. He is also known to have partnered with the Make-A-Wish Foundation, an organization that supports and sponsors children with critical illnesses by granting them a wish.