Jason Statham may not be the best fit for many people’s choice of great Hollywood stars, but he is undoubtedly one of the fittest in the industry. With his endearing British accent and rugged looks, Jason is also one actor who knows what film role best fits him; he takes no funny or less active roles. Anytime you see Jason in movies, the actor is either punching, shooting or kicking people. You could easily call him a con man, hitman, as well as a veteran.

Best known for his roles in films like Lock Stock and 2 Smoking Barrels, The Transporter, Crank and The Expendables, Jason remains one of Hollywood’s most consistent leading men in action movies. Beyond his acting skills, many are drawn to him mostly because of his height and physical fitness. Fans who have met him believe that he’s much shorter than he appears in most of his movies. And this has aroused curiosity, with many wanting to know more about the actor’s height and body measurements. All these and more you’d be happy to learn in the following paragraphs.

How Tall Is Jason Statham?

The renowned English actor and filmmaker may well be qualified for Hollywood’s fittest men, but he’s certainly not getting on the list of tallest people in the industry. Not even the top 20 list that includes the likes of Brad Garrett, Armie Hammer, and Joel McHale who are 6′ 8″, 6′ 5″, and 6′ 4″, respectively. Jason is 5 feet 10 inches tall, which is quite cool for an average guy but not with sports like basketball, where the average height for a player is 6’7″. However, the actor is much taller than basketball point guard, Anthony “Spud” Webb who is 5′ 7″, and basketball coach and former NBA star, Keith “Mister” Jennings who is also 5′ 7”. 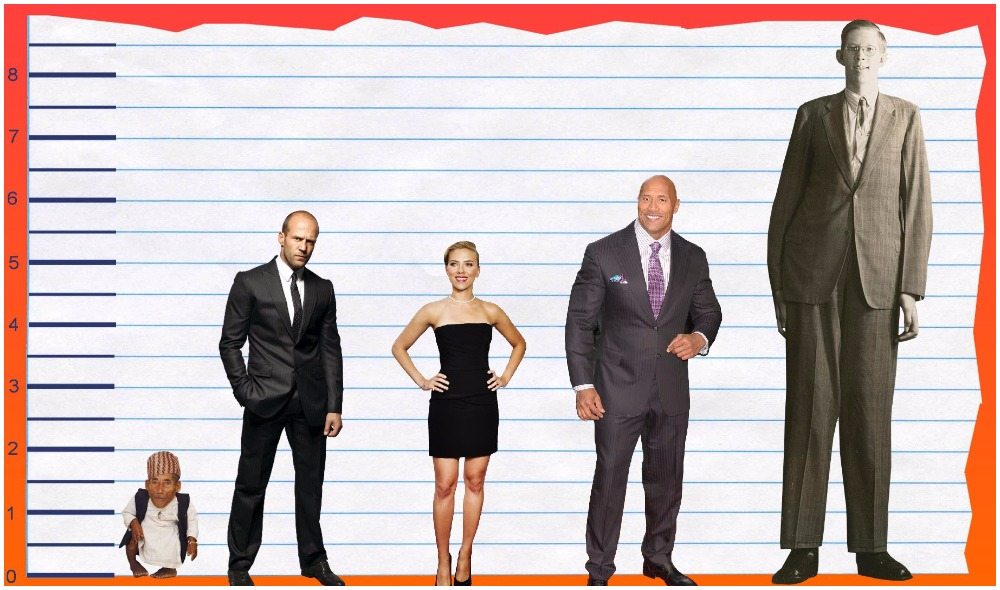 Back home in the industry where he belongs, the actor does share equal height with the likes of Taylor Swift, Blake Lively, Ryan Reynolds, and ‘Ted’ actor Mark Wahlberg. On the other hand, he is an inch taller than the likes of Jackie Chan, Eddie Murphy, Jamie Fox, Tylor Lautner, and Conor McGregor, who are all 5’9″. Persons like Dwayne Johnson and Vin Diesel, who often share similar film roles as Statham, are quite taller than he is by a few inches. The two Fast and Furious actors have their height measurements as 6′ 5″ and  6′ 4″, respectively.

Also, there are arguments about Jason devising some tricks to make himself appear taller in most of his films. Many believe he wears elevator shoes, which could be possible especially with a pair of well designed Chamaripa elevator shoes that gives two to five inches automatic elevation without anyone noticing

If you are a true fan of the Fast and Furious film series, you would as well notice that all of the film’s leading actors appear to have the same height. This could be assumed to be part of the film’s trick. Imagine the scene where five-foot-ten Jason Statham stands and looks six-foot-five Johnson (the Rock) eyeball to eyeball.

One other interesting fact you would love to know about Jason’s height is that somehow, he finds himself dating women who are either the same height as him or even lower. All the ladies he has dated in the past, including  Kelly Brook and Sophie Monk (both 5’6″) and Courteney Cox (5′ 5″) are a few inches below him. Only Rosie Huntington-Whiteley, his current girlfriend and fiancee is naturally 5’10”, except when she throws on a pair of heels.

Jason, no doubt has a dashing physique, the kind every young man would do anything to have. One needs lots of hard work and proper dieting to build abs like Jason’s. The British actor weighs 78kg (185lbs), and he is not looking forward to bulking up whatsoever. His chest, biceps, and waist measurements are 48 inches, 15 inches, and 34 inches, respectively. Jason’s main interest is to maintain a quick, athletic, and agile body and mind; his workouts mirror that. While the A-list actor is no so much after his diets, his workout seems to be of utmost importance for him to keep fit. He starts his day with a warm-up of 10 minutes rowing, and then continues into the rest of his training that includes Decline Parallette Push-Ups, Body Weight Squats, Bench Press Reps, Resisted Fat Rope Pulls Reps, and a lot more. As per his diet, the actor takes in 2000 worth of calories every day. His low calories diet consists of:

Other Fun Facts To Know About the A-List Actor

Statham is not one of those actors who do not want to get their hands dirty to ensure the success of their films. He has high expectations, thus he would want to be a hundred percent involved in his assignments, especially when it comes to producing his kind of films. The actor creates and performs most of his movie stunts that usually includes car chase and fight sequences. At some point, he exposes himself to danger while performing stunts. He had once found himself hung from the chopper 2000 feet over LA during a helicopter fight scene in his 2006 film, Crank.

Playing pranks on someone may appear as childish to so some people. But for Jason Statham, his serious antihero roles have not hindered his light-hearted side from manifesting. A good example of his prank happened while on the set of Lock, Stock and Two Smoking Barrels, where the film producer Matthew Vaughan thought his brand new Porche had developed a fault when he heard metal grinding in the vehicle. Unknown to him the metal sounds he was hearing were because of the horseshoes which Statham filled in his car boot.

He Formed a Musical Band With His Family

This may be a surprise, but yes, the actor did form a band group with the rest of the Stathams. That, of course, was during his teenage years. He wasn’t the vocalist, his father was while he mounted the drum side, and his brother Lee handled the guitar. His father, who was predominantly a street seller, would sometimes perform as a lounge singer.

He Is 20 Years Older Than His Girlfriend

Finding celebrity couples with such a significant age gap isn’t surprising, but only a few have this huge gap between the actor and his girlfriend, Rosie Huntington-Whiteley. Rosie was 22 years old when her path crossed with Jason, 42. Despite the huge gap, the two still value each other, and their love keeps waxing stronger. The couple first met in 2010, and they got engaged in 2016.

Jason Statham Is a Father

Though the wedding bells are yet to be heard, Jason and his model girlfriend have gone a long way together. They first broke the news about expecting their first child in February 2017, and on June 24, 2017, they welcomed their son, Jack Oscar.