Asides a few public appearances with his parents, Homer James Jigme Gere has not been in the limelight as much as expected, considering he is the son of two Hollywood greats. At the time of his birth, his parents (especially his father) were already enjoying global popularity as a result of their acting exploits.

Homer’s father, Richard Gere, is one of the ’70s and ’80s screen sensations we wouldn’t forget in years to come. He started acting in 1969 and has remained active to date, picking up prestigious awards along the line. His mother, Carey Lowell, is known for her roles in series and films like Law & Order, Fierce Creatures, The Guardian, Six Degrees, as well as Licence to Kill. Homer James Jigme Gere, on the other hand, has not hinted in any way that he’s interested in the movie industry or even the spotlight.

The younger Gere was born in New York City on the 6th of February 2000. He got his name from a combination of his grandfathers’ names, a decision his parents made after his birth. Homer was born into fame as by the time he joined his family, his father was already heralded as one of the most popular actors in the world and his mother’s acting and modeling career was equally gaining major ground at the time. Despite growing up, surrounded by entertainers, his folks never compelled him to go into acting.

Homer is possibly in college as of the time of updating this piece but there are no details of his early education and the institutions he attended. He was only a 13-year-old when his parents decided to pull the plug on their marriage. They made their separation official in 2013, spending the following three years in a court battle over divorce settlements. Homer James Jigme Gere was at the center of the divorce proceedings which were carried out in the Supreme Court of the State of New York.

Both parents wanted custody and his mother refused to move out of the family’s $4.5 million New York property. The battle finally came to an end in October 2016 with Homer’s mother winning custody while his father kept in touch. 16 at this time, Homer handled the regrettable turn of events so maturely and maintained a close relationship with his father. The two have made several public appearances together, including on red and blue carpets.

Despite keeping a low profile and steering clear of the spotlight, Homer has often made public appearances with his famous father. He was spotted in 2014 beside the Hollywood legend at the 44th annual Giffoni Film Festival at Giffoni Valle Piana, Italy. Holidays are not left out on the schedule of the father-son duo. They were spotted in Italy in 2017, holidaying and having a good time with Alejandra Silva, Richard’s girlfriend at the time. 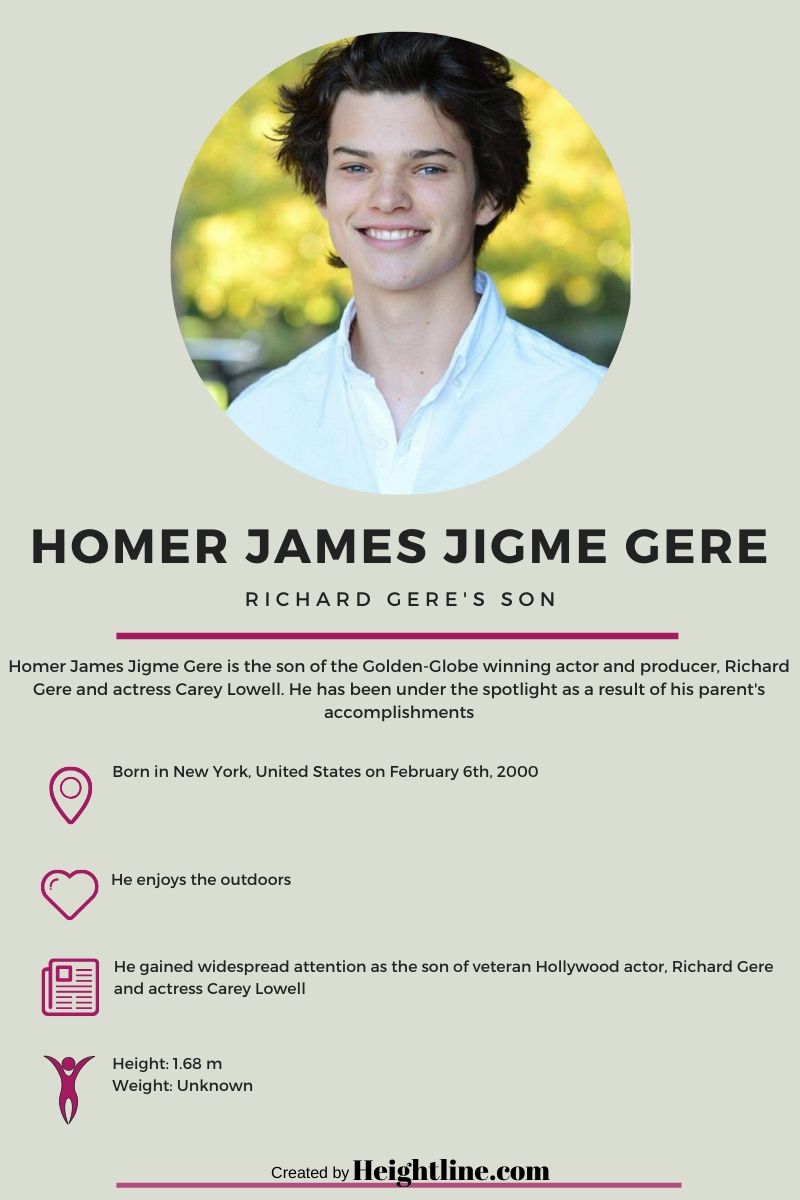 Though he was born and raised as the only child of his parents, Homer James Jigme Gere now has a big family, thanks to his parents’ other romantic entanglements and marriages. From his mothers’ previous marriage to actor, producer, and director Thomas Griffin Dunne, Homer got himself a half-sister named Hannah Dunne.

The newest member of the family came in February 2019, when Richard Gere’s girlfriend-turned-wife, Alejandra Silva, was delivered of a baby boy in New York. In addition to giving him a half-brother, Alejandra Silva also brought on board a son named Albert, whom she had in her previous marriage to Govind Friedland.

Homer’s step-mom is a Spanish publicist and activist. She has known Richard Gere for over a decade: as a family friend, but their relationship took a romantic turn and landed them in matrimony. The couple dated for a while before they sealed their love in a wedding ceremony in 2018.

While his celebrity parents have been relishing the perks of being in the limelight, as well as the popularity that comes with social media, Homer prefers to stay away from such platforms. Facebook is the only platform where he has an account and he doesn’t keep it busy with information and pictures of his activities.

Banks Onuoha
Banks is a graduate of Mass communication, a meat junkie, movie geek, and perfectionist. The thrill of travelling the world through writing and editing from the comfort of her desk and PC is what keeps her going most of the time. After office hours, you might catch her still writing at home or running some culinary experiments.
Fact Check: We strive for accuracy and fairness, if you've found a possible error, be it factual, editorial or something that needs updating, please contact us

Blake Shelton Net Worth: How Much is He Worth Compared To Gwen Stefani

Lyssa Chapman Siblings, Net Worth and 7 Other Interesting Facts