In September 2013, AMC announced that a prequel to the long-running hit TV series The Walking Dead was on its way. The show’s storyline follows the Manawa and Clark families who are on the run from the swamp of infected zombies threatening to take over civilization. Travis Manawa, a lead Fear The Walking Dead cast member, his son Chris, and his fiancée Madison Clark struggle to escape from the widespread zombie infection. They were later joined by Alicia and Nick Clark (Madison’s children), Liza (Travis’ ex-wife), Victor Strand (the businessman), and the Salazars. As the infection begins to spread, the zombies multiply and tragedy strikes, the survivors must depend on each other even more.

Released on August 23, 2015, Fear The Walking Dead has run for 5 seasons, garnered millions of viewers, received several award nominations and has won the E! Online Best. Ever. TV. Awards and E! Online TV Scoop Awards, amidst notably mixed reviews. It was renewed for a sixth season in July 2019.

The show has seen the exit of a number of top original casts since launch. We examine who they are and why they left.

Fear The Walking Dead and the Walking dead exist in the same universe and so it won’t be surprising to see a number of characters appearing in both shows. Like its prequel, Fear the Walking Dead offers fans the opportunity to meet some of their favorite characters once more and that, of course, include Lennie James (Morgan Jones), Austin Amelio (Dwight) and Tom Payne (Jesus), to name a handful of them. But then, there are some Fear The Walking Dead cast members who are no longer part of the show for different reasons. They include: When Cliff Curtis’ character Travis Manawa was killed off in Season 3, it shocked fans. Not only had it seemed sudden and early, but because the character played such a pivotal role of being moral, unifying, protective and the selfless head of the Manawa, and invariably, the Clark families, it had seemed he would have more seasons to cover. Even the show’s creator thought he would, however, Curtis had scheduling issues arising from his casting in James Cameron’s new four-part Avatar sequels around the same time. In order to allow him to commit to his latest project of interest, Fear creators decided that killing off his character early was best. Henrie played Chris Manawa, Travis’ rebellious teenage son from his earlier marriage who continues to hold him in contempt for the death of his mother after she was bitten. He’s shot by ‘friends’ in season 2. At about this time, Henrie had landed the role of Gabe Reyes on Marvel’s Agents Of S.H.I.E.L.D. His exit from Fear only seemed natural. Dickens played Madison Clark, Travis’ fiancée, Nick and Alicia’s mother, and the show’s female lead and protagonist. Travis’ death saw her assume his position as head of the family almost immediately and in an exceptional manner. She died saving her children in Season 4.

Dickens is presently making appearances on HBO’s Dead Wood, but is open to returning to Fear if her character is ‘revived’. Perhaps an exit as shocking as Curtis’ was Dillane’s in Season 4. A recovering addict and son of Madison, Dillane’s courageous and selfless character Nick Clark met his surprising end in the hands of a rival group, but not before taking vengeance on their members. Dillane had hinted on leaving the show since Season 3. For him, he had played Nick for a while and wanted a new challenge. Additionally, as he isn’t American, he missed home which for him is in Europe. Nonetheless, creators are bringing his character “back again”, which means he will make one more appearance before his final exit. Rodriguez’s character, the disciplined and caring nurse, Chris’ mother and Travis’ ex-wife, Liza Ortiz, was the series’ first character exit. She lasted for only two seasons and although her role was brief, Rodriguez says her desire to play a strong woman facing fears like blood, gore, and disaster, informed her interest in the character. 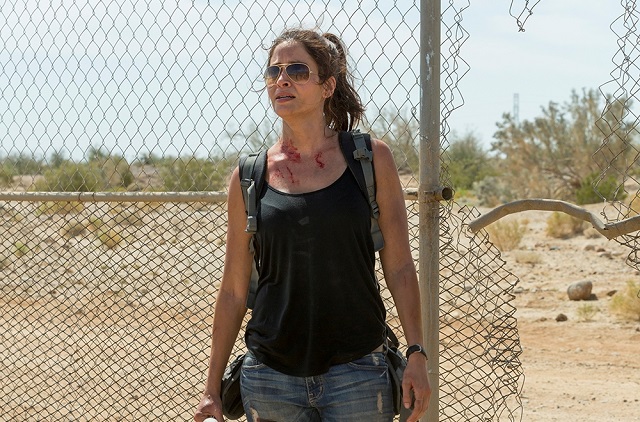 Mason played Ofelia Salazar, daughter of Daniel and Griselda Salazar another family on the run from Season 1 until her death after being infected in Season 3.

Her exit from the show had been largely due to the challenges of early pregnancy especially because changes in filming locations would have been a risk in her condition. Her exit was mutually agreed on.

Some Original Cast Members Are Still on the Show

Season 1 main cast who are still on the show include Alycia Debnam-Carey who plays Madison’s daughter, Alicia Clark, Colmon Domingo who plays wealthy stranger Victor Strand and Ruben Blades who is Daniel Salazar.