Captivating Facts About Dylan Dreyer, Her Husband and Net Worth Incredibly active on social media, Dylan doesn’t hesitate to update her fans with what goes on in her career and personal life. It is almost as if she was in a reality TV show of her own only that it wasn’t on TV but on social media, a reality social star if you will? Dreyer frequently appears on Today on weekdays as a weather correspondent and as a fill-in for Al Roker and Carson Daly Dylan Dreyer is quite good at her job, constantly traveling across the country to cover one natural disaster or the other. Hurricane Irma and Harvey were particularly stressful for her. She even got scared while covering the Category 5 Hurricane Irma and it took a sweet text message from her supportive husband to keep her going. She revealed this via Today and even shared a shot of the text message with fans…

Dylan Dreyer Knew What She Wanted To Be From The Beginning

Following her graduation, she began her professional career and worked at WICU in Erie, Pennsylvania; WJAR in Providence, Rhode Island; and WHDH in Boston, Massachusetts. Improper Bostonian magazine named her the 2008 Boston’s Best Meteorologist. Also a  recipient of the American Meteorological Society’s prestigious Seal of Approval award, she broke into the mainstream in 2012 when she joined NBC News as a meteorologist.

She is the weather anchor of NBC News’ Weekend TODAY and Sunday TODAY with Willie Geist. She also co-hosts the 3rd hour of TODAY as well as serves as a weekday weather correspondent and regular co-host for TODAY and NBC Nightly News with Lester Holt.

Dreyer is also the host of her own weekend program on NBC, Journey with Dylan Dreyer, the Telly Award-winning program that airs Saturday mornings. Moreover, she co-hosts a new Sirius XM radio show, Off the Rails, with Al Roker and Sheinielle Jones.

However, She Was A Calendar Girl Before a Weather Girl

Dylan Dreyer, the lovely weather girl that everyone seems to adore has a little-known fact about her. She was a stock photo model even before her TV career took off. She used to be a calendar girl. During her high school days, Dreyer posed as a stock-photo model after being discovered while working behind the counter of CVS, a retail and health care company. She appeared in CVS and multiple newspaper ads.

Dylan Dreyer Never Thought She Would Live In A Smaller House

After years working for the giant network NBC, Dylan Dreyer has been able to amass a net worth estimated at $1 million. Her salary, though never revealed to the public is estimated to be in the tune of $300,000.

Her hard work has afforded her the privilege to live in some amazing houses. She previously lived in a palatial home in Boston which included a garage, attic and other storage space. However, after her 2012 marriage, she had to downsize to a 750 square feet one-bedroom apartment in Manhattan, New York, for her husband’s job. They bought the home in 2012 for $580,000.

She told At Home with TODAY of the Manhattan house in 2014, “I never in a million years thought I could downgrade to 750 square feet.” “Not to mention, share it with someone else.” But, needless to say, they made it work.

“I love that the kitchen is open to the rest of the living space. “I love to cook and this way I don’t feel like I’m removed from everything else going on while I’m in the kitchen,” she said of the floor plan.

Four years later, when the duo decided it was time to expand their family, they kissed the small house goodbye in late 2016 and relocated to a new apartment. They listed the co-op for $862,000 in December 2015. She now lives in New York with her husband and sons.

Her Marriage Is A Marriage Made In Heaven Dylan Dreyer got married to her husband, Brian Fichera from Easton, Massachusetts in 2012. He is a Nightly News cameraman and she predicts the forecast, a match made in heaven. They first met as colleagues at WHDH, Boston. Atypical of Dylan, she narrated the story of how they met in a wedding blog she set up.

Fichera proposed to Dylan in July 2011 on the front porch of his parents’ house in Easton.  The couple had their nuptials in October of the following year, at the Cathedral of the Holy Cross in Boston.

Beside their love for each other, the couple also loves to travel across the country together, go out for the occasional date night, golf, and explore the world together. The love between them is so strong, and now they have two little ones, they can’t help but share the doses with them.

Dylan Dreyer Didn’t Want A Child When She Got Married

After four years of marriage, the couple was ready to welcome their first issue to the world. Dylan Dreyer announced her first pregnancy on the Today Show on June 10, 2016. As per her revelation on Today.com, the couple “weren’t in a rush to have kids and, to be honest, there was a time when we declared we never wanted kids!”

However, just in the same way they declared no child, they looked at each other one day and declared, ‘I want a baby!’ At the time, “it all just seemed right.” 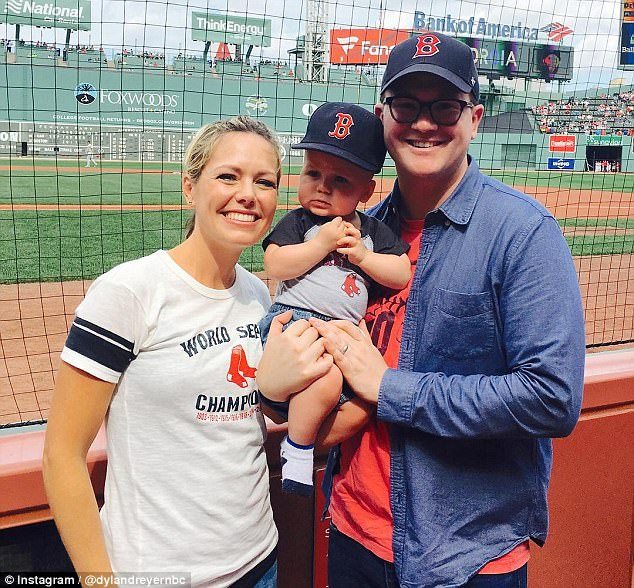 The couple welcomed their first child, a baby boy named Calvin ‘Cal’ Bradley Fichera on December 17, 2016, at 11:52 EST. The tot weighed 8 lbs, 3 oz. They may have been nervous at first about having a child, but with the birth of their son, they couldn’t be happier becoming parents.

Since becoming a mom, Dylan has been taking her fans through her experience as a new parent, like when she struggled with breastfeeding and had to supplement with formula instead of the exclusive breastfeeding she planned. Three years later, she was ready to go the motherhood path a second time.

Despite a miscarriage on her next attempt, she was as determined as ever to have another baby. Her family grew by one on January 2, 2020, as they welcomed Oliver ‘Ollie’ George, into the world. He was born at 9:13, weighing 7 lbs, 2 oz.

Dylan Dreyer can be found on Instagram with thousands of followers in awe of her beauty and brain combination. She is a weather girl on TV but she may be a model on Instagram with all the proteins she posts pictures of. The NBC weather girl is no doubt a beautiful woman. Even after childbirth, she still looks amazing in a dress. At 5′ 3″, she cuts an amazing physique. Her body measurements are: 36-25-37 inches (91-64-94 cm). You can see more hot photos on her Instagram page.

She likes to share what is going on in her daily life so people get to know the real her and not just the woman who works for NBC News. Dylan works hard in her professional and her personal life and she enjoys both worlds very much.