From Dexter to Gossip Girl, Desmond Harrington has made quite a number of TV show appearances. He is also known for movies such as Ghost Ship (2002), Wrong Turn (2003) and most recently The Neon Demon (2016).

This article is dedicated to Desmond Harrington’s bio, his career highs and lows as well as his personal life. Remember that time when the internet went abuzz after he began looking skinnier? We’ll explore the facts about that incidence. Did you know that he once dated Amada Seyfried? Read on to discover more…

Desmond Harrington was born on October 19, 1976, in Savannah, Georgia, U.S. He spent the early years of his life growing up in the Bronx, New York. After high school, Desmond attended college in Manhattan but did not make it to graduation.

Subsequently, he began working as a landscaper, laborer, and as a cold caller at a brokerage. While working as a bartender, a colleague of his encouraged him to enrol in acting classes. And there, was the beginning of his journey to Hollywood stardom.

Harrington landed his first role in 1999 Luc Besson’s epic historical drama film “The Messenger: The Story of Joan of Arc.” Though the movie was met with tepid reviews and performed poorly at the box office, grossing just $7 million past its $60 million budget, it was a good debut for Harrington.

He got an uncredited role in 2000’s Boiler Room. In 2001, he played Bobby in biographical film “Riding in Cars with Boys.” In 2002, Harrington appeared in American-Australia horror film Ghost Ship which was a box office hit, grossing over $68.3 million from a $20 million budget.

Horror films seemed to be going well for him. As a result, he landed a role in yet another horror film Wrong Turn (2003). The success of the film saw it develop into a film series with 5 sequels made after the initial installation.

In the world of small screen, Desmond made his debut on Steven Spielberg’s science fiction drama Taken where he starred in three episodes. His subsequent TV appearances would include; Dragnet, Sons & Daughters and Rescue Me.

However, his biggest small screen role came in Dexter, a crime drama mystery series which showed on Showtime from 2008 to 2013. While on Dexter, Harrington landed a role in the very popular CW series Gossip Girl, playing Jack Bass, Chuck Bass’s manipulative uncle.

Desmond landed a minor role in 2012 superhero film “The Dark Knight Rises” which became the second Batman film to earn over $1 billion at the global box office.

Harrington continues to be active both on the big and small screen. Perhaps his most successful film yet is Dexter which brought him 4 Screen Guild Awards nomination for Outstanding Performance by an Ensemble in a Drama Series.

From the 5th season of Dexter, fans noticed Desmond’s thinner and more chiselled figure. This, as expected, sparked rumors among fans of the TV series. Keywords like Desmond Harrington weight loss became frequently searched on Google. Many speculated that the actor had undergone some form of plastic surgery while others worried that he could be plagued by a life-threatening disease or even be addicted to hard drugs. 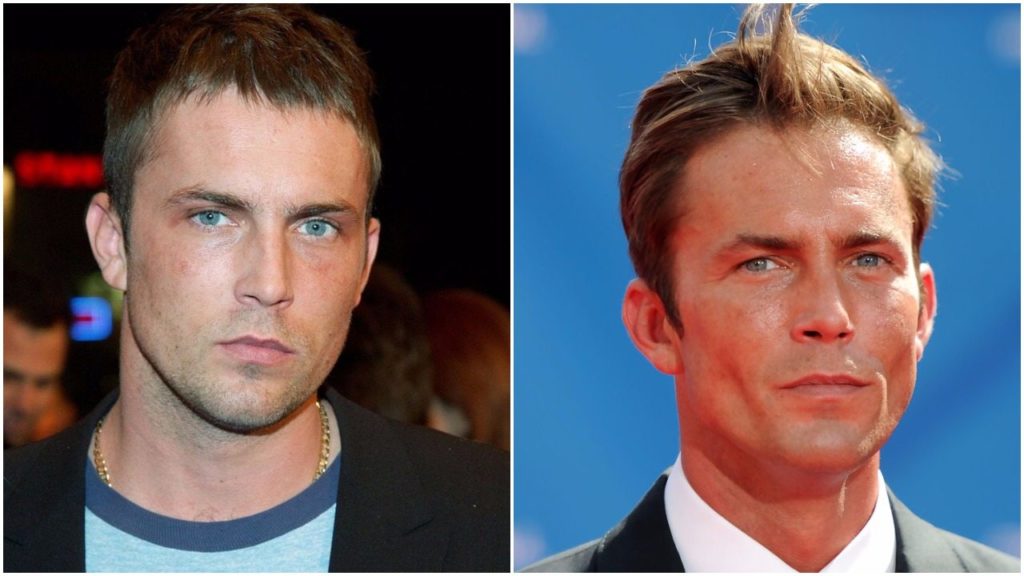 In other to quell the rumors, Desmond himself addressed the weight loss rumors saying he was only eating healthier. Per Dexter daily, he said;

“I didn’t have any plastic surgery, I’m not sick it’s called running and eating better! You understand? I’m in my 30s now. All these ridiculous stuff that I read “He’s sick, he’s on drugs”, get a life! I just changed how I ate and begin to run!”

Desmond is one of those hyper secretive celebrities who try as much as they can to keep their names out of the tabloids, much to the frustration of fans and admirers. This makes it difficult to know the ongoings in his personal life. Sometime in 2012, Daily Mail paparazzi was able to steal snaps of him with then girlfriend Veronica Mars actress Amanda Seyfried. Unfortunately, the romance was short-lived as they broke up in 2013 with the reason concealed from the media.

Amanda then found love in the eyes of actor Thomas Sadoski. They met set while filming “The Way We Get By.”

However, while Amanda isn’t afraid to share details of her personal life to fans via social, Desmond is the exact opposite. As of 2014, it was rumored that he was in a relationship with social media star Gabbie Hanna of the Gabbie Show. The rumors began to circulate after Gabbie made this Tweet;

Desmond Harrington is everything I want

However, that rumor has never been confirmed as true or debunked as false, leaving more mystery behind Harrington’s personal life.