Danny Trejo is an American actor with several Hollywood movies to his credit. Probably due to his distinctive appearance, he is known to play the role of the antagonist, villain or the antihero. However, in reality, the actor is nothing like the bad guys he usually portrays in movies. According to his co-stars, he is one of the nicest people to work with.

His movie credits include Heat (1995) alongside Robert De Niro and Al Paccino, Desperado (1995), Anaconda (1997), Con Air (1997) among several others. Trejo is probably best known for his portrayal of the character Machete, in the series Spy Kids, originally developed by Robert Rodriguez. The character has also been developed into a series of other movies with Trejo maintaining the role of Machete.

Daniel Trejo was born on May 16, 1944, in Maywood Los Angeles, California to Alice Rivera and Dan Trejo. His parents are originally from Mexico. He is actually the second cousin of Mexican-American filmmaker Robert Rodriguez, however, they only realized this fact while working on the 1995 western action film Desperado.

Trejo’s father worked as a construction worker and prior to his acting career, young Trejo also worked as a labour foreman. While growing up, Danny Trejo got into a lot of trouble which landed him in jail several times. His physical appearance didn’t also help matters as it landed him in much more trouble.

During one of his prison stints, Trejo won the lightweight and welterweight boxing divisions at the San Quentin State Prison. He also completed his diploma during his time in San Quentin. He was finally able to curb his addiction to drugs and went on to work as a youth drug counselor.

Danny Trejo’s first acting gig was getting featured as an extra in the 1985 thriller film Runaway Train. Coincidentally, he was recognized by the film’s screenwriter Edward Bunker whom he had met during one of his stints in prison. Bunker, remembering Trejo’s boxing talents, hired him as an on-set boxing coach for one of the movie’s stars.

From 1985-1990, Trejo got featured in dozens of B-movies about criminals and convicts. Danny Trejo became known for playing the villain, either as a criminal or a low-life, however, he also has a few “good guy” roles to his credit. He has since appeared in numerous roles both on the small screen and the big screen with an average of 5 movies per year.

Danny Trejo played the role of Machete in the adventure comedy film series Spy Kids, created by his frequent collaborator Robert Rodriguez. The Spy Kids franchise consists of the movies Spy Kids (2001), Spy Kids 2: The Island of Lost Dreams (2002), Spy Kids 3-D: Game Over (2003) and Spy Kids: All the Time in the World (2011). The Machete character was expanded into a series of movies including Machete (2010) and its 2013 sequel Machete Kills, with Trejo maintaining the title role of Machete. Danny Trejo is currently unmarried. However, the actor was married in the past to actress and producer Debbie Shreve Trejo. The duo tied the knot way back on December 12, 1997. They worked together on the films Vengeance (2006), High Hopes (2006) among others. However, their marriage ended in a divorce in 2009. Debbie Shreve Trejo currently works as a real estate consultant. 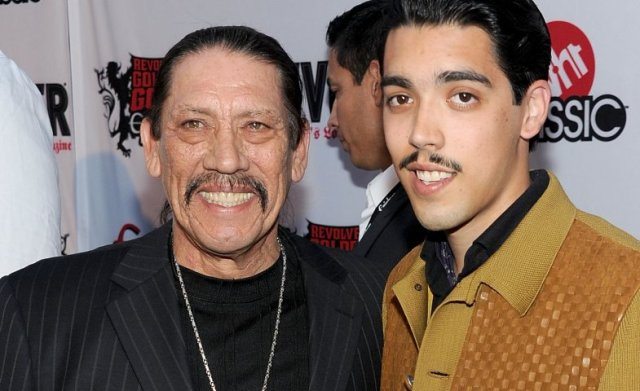 Of Danny Trejo’s three children, the most popular has got to be his second son Gilbert who is also an entertainer like his father. Gilbert Brian Trejo was born on March 8, 1988, in Los Angeles, California. He is an actor and a producer. His acting credits include Machete (2010) and China Test Girls (2017), both of which also featured his famous dad. On China Test Girls, Gilbert Trejo also played behind-the-scenes roles, doubling as writer and producer.

Danny Trejo’s rough scarred face is as a result of a bout of cystic acne and scars from a terribly violent fight. He also has a large tattoo on his chest, depicting a woman wearing a sombrero.

Though he started out on a rough path, Trejo has transformed his reality for the better. He has been sober since 1969.

For the 1995 movie Heat, Trejo was originally hired as an expert to ensure that the robbery scenes looked real. He was eventually hired to star in the movie as a member of Robert De Niro’s team.

Danny Trejo was inducted into the Texas Film Hall of Fame on March 8, 2012, in Austin, Texas.

In addition to his long-running acting career, Trejo is also an entrepreneur. He owns a chain of restaurants in Los Angeles as well as his own brand of coffee, beer and other merchandise