Who is Bryce Maximus James? All About LeBron James’ Son

Whether it is music or sports, acting, or even politics, it is not hard to find the children of the greats walking in the shoes of their parents. Hence, it’s not surprising when LeBron James said he was hoping to play in the NBA with his son, LeBron James Jr. However, Bronny, as he is fondly called, is not the only child of King James. He has a younger brother named Bryce Maximus James. Although he is still young, Bryce is also trailing in his father’s footsteps. Before taking you through the brilliant facts you never knew about Bryce, let’s take a brief look at who the young athlete is.

Who is Bryce Maximus James?

June 14, 2007, was the day Bryce Maximus James was born to one of basketball’s greatest, LeBron James, and his entrepreneur wife, Savannah Brinson. He is the second of the three children of the NBA champion. He was raised in Akron, Ohio, along with his siblings. Having one of the greatest basketball players as his dad and a prolific point guard as his brother, Maximus grew up with so much admiration for the game of basketball.

Following his passion, he started featuring in the game when he was still a child. He is being trained and mentored by his father, together with his elder brother. As a result of this, Maximus started pursuing a career in the field by joining his school’s basketball team. Still, in the quest to complete his elementary education, young James has attended diverse schools, which include Old Trail School located in Akron, Ohio, and Crossroads School situated in Santa Monica, California. Currently, he attends Sierra Canyon School in Chatsworth, Los Angeles.

Bryce James At A Glance 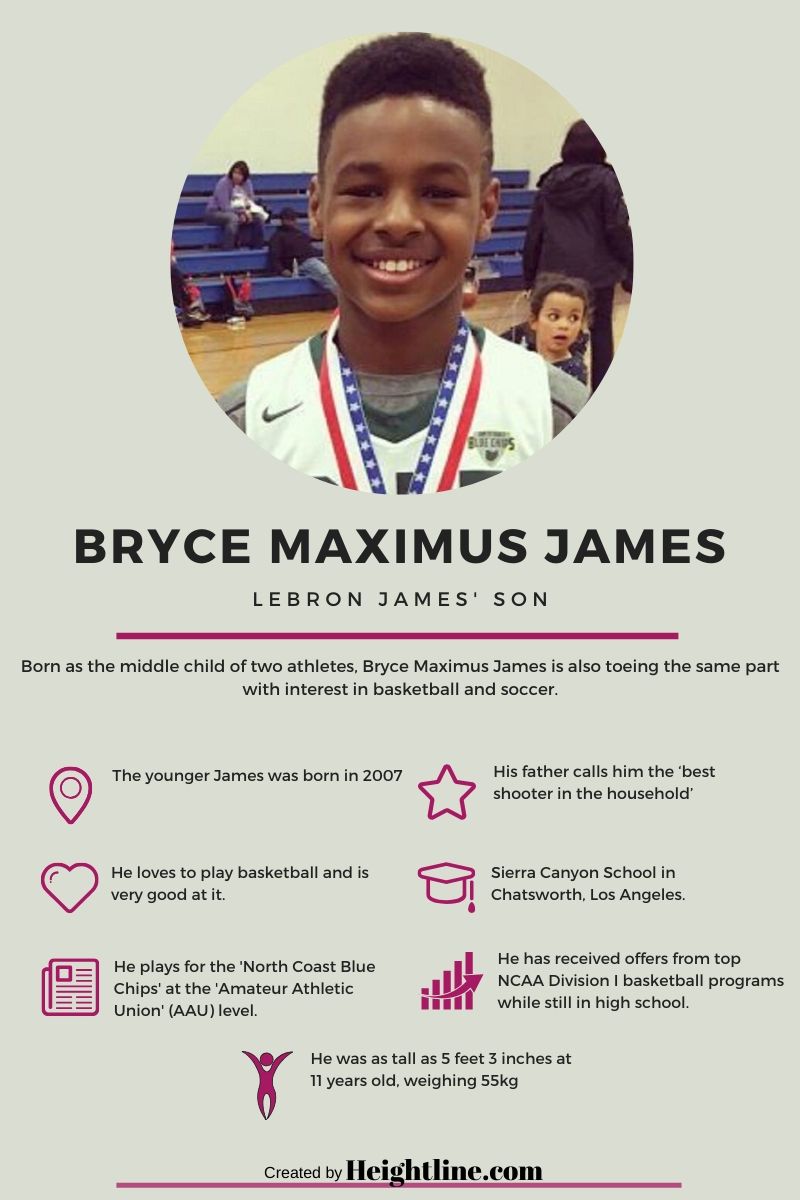 His Parents Were Athletes in High School

The parents of the young James are, as already noted, LeBron James and Savannah James. The two met when they were still high school students as James is an alumnus of St. Vincent-St. Mary High School where he played basketball. While Savanna was a softball player and also a cheerleader at Buchtel Community Learning Center. They dated for several years and have remained together since they first met. Savannah James serves as the founder of a furniture line called Home Court and a mentorship program, Women of Our Future.

He Has Two Siblings

Bryce Maximus James has an elder brother, LeBron James Jr. and a sister, Zhuri Nova James. James Jr., who was born in 2004, has often made headlines on media outlets following his exploits on the court and has received offers from top NCAA Division 1 basketball programs. His younger sister, Zhuri joined the family in 2014 and just like his brothers, she also attends Sierra Canyon School located in Chatsworth, Los Angeles.

Having been trained by his father and older brother, Bryce began making a name for himself in the game of basketball, even before the age of 10. He has been associated with several Amateur Athletic Union (AAU) basketball teams. So far, he has been a sensational player as part of his school’s basketball team and has also been so popular for his shooting range.

Various videos that capture some of the youngster’s amazing performances on the court, most especially his shooting prowess have been shared on social media. As a result, many people compare him to young Steph Curry.

Even though for now, Bryce Maximus James is yet to have the amazing scoring ability of his brother, who has much potential to play in the NBA or even the great passing ability and prowess of his father that has made him a king in the court, it is apparent that he may end up becoming as great as his father.

He Also Harbors an Interest in Other Sports

Aside from basketball, Bryce Maximus James has been passionate about other sports. While growing up, he loved other sports, including ice hockey and football. But then, his father did not want him to play either because he was scared for the safety of the child. However, as he kept growing, he was allowed to decide what sport he wanted to play. To the surprise of no one, he chose basketball. In 2018, his father made a tweet describing his son as the best shooter in the house, he called him the Flame Thrower.

Regarding his height, Bryce Maximus James is not yet a teenager, hence, his actual height cannot be determined since he is still in his growing stage. Nonetheless, considering that when James Jr. was 14 years of age, he had a height of 5 feet 11 inches (1. 80m) and their father has a height of 6 feet 8 inches (2.03m), it is easy to assume that he will grow to become a man of a good height. Perhaps, if anything can stop him from playing basketball, it would not be his height.

Bryce Maximus James enjoys the complete support of his family, as he tries to become a better player with each passing day. Following his efforts to improve his games, his father and other family members take out time to always cheer him up by attending his school games and other tournaments.

Even though he is yet to enter his teen years, Bryce has decent followership on social media. On Instagram, he has amassed thousands of followers. He is not the most popular kid that you may easily find on social media platforms and this can be attributed to him not getting too involved with social networking.